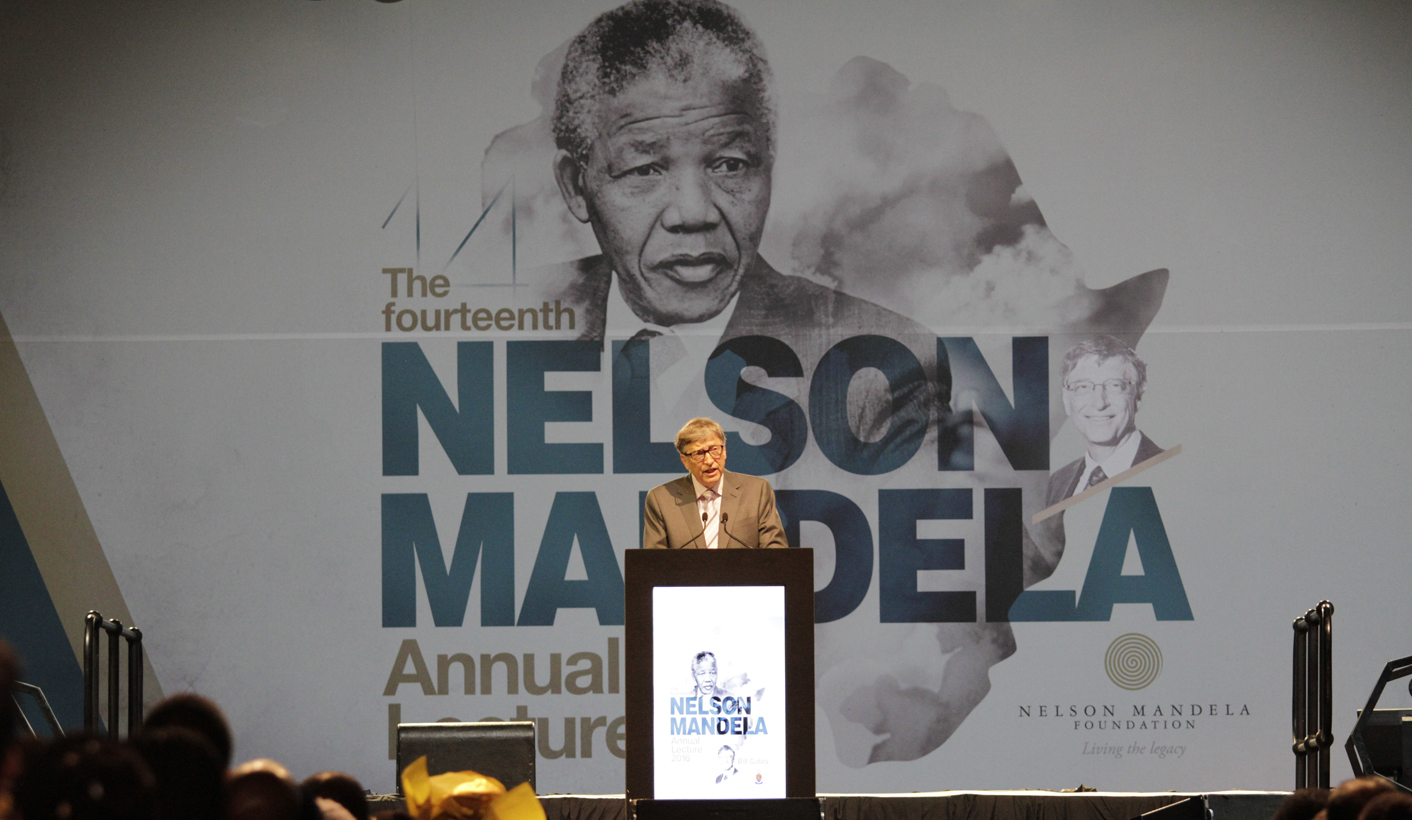 Africa’s future rests in the hands of its youth – and every effort must be made to ensure they thrive, philanthropist and entrepreneur Bill Gates said in South Africa yesterday.

Delivering the 2016 Nelson Mandela Annual Lecture at the University of Pretoria (Mamelodi campus), Gates said he was optimistic about the future of the continent – because of its young people.

Pointing out that Africa was demographically the world’s youngest continent – in the next  35 years, it is estimated that 2-billion babies will be born in Africa and by 2050, 40% of the world’s children will live in Africa – Gates said he believed Africa’s youth “can be the source of a special dynamism”.

“Economists talk about the demographic dividend. When you have more people of working age, and fewer dependents for them to take care of, you can generate phenomenal economic growth. Rapid economic growth in East Asia in the 1970s and 1980s was partly driven by the large number of young people moving into their work force.

“But for me, the most important thing about young people is the way their minds work. Young people are better than old people at driving innovation, because they are not locked in by the limits of the past. The real returns will come if we can multiply this talent for innovation by the whole of Africa’s growing youth population,” he said.

Gates used the platform of the 14th Nelson Mandela Annual Lecture – the Nelson Mandela Foundation’s flagship programme to honour its founder, Nelson Mandela, and to raise topical issues affecting South Africa, Africa and the rest of the world – to lay out his vision of how to create a better world. The theme of his speech was “Living Together”.

Gates said he had admired Mandela, whom he had met on many occasions. He said that “one topic that Nelson Mandela came back to over and over again was the power of youth”.

“He knew what he was talking about, because he started his career as a member of the African National Congress Youth League when he was still in his twenties. Later on, he understood that highlighting the oppression of young people was a powerful way to explain why things must change. There is a universal appeal to the conviction that youth deserve a chance. I agree with Mandela about young people, and that is one reason I am optimistic about the future of this continent,” said Gates.

But to exploit Africa’s potential, its young people needed to be given “every opportunity to thrive”.

“We are the human beings who must take action, and we have to decide now, because this unique moment won’t last forever. We must clear away the obstacles that are standing in young people’s way so they can seize all of their potential,” he said.

Added Gates: “If young people are sick and malnourished, their bodies and their brains will never fully develop. If they are not educated well, their minds will lie dormant. If they do not have access to economic opportunities, they will not be able to achieve their goals.

“But if we invest in the right things – if we make sure the basic needs of Africa’s young people are taken care of – then they will have the physical, cognitive, and emotional resources they need to change the future. Life on this continent will improve faster than it ever has. And the inequities that have kept people apart will be erased by broad-based progress that is the very meaning of the words: “living together.”

The co-founder of software giant, Microsoft, said issues that needed to be tackled to ensure Africa’s youth thrived were:

He said health and nutrition were a top priority because “when people aren’t healthy, they can’t turn their attention to other priorities. But when health improves, life improves by every measure”.

Next was education without which children cannot develop the knowledge and skills to become “productive contributors to society”, said Gates.

Then, Africa’s youth needed to have the “economic opportunities to channel their energy and their ideas into progress”.

But Gates said good governance was vital to ensure that this happens – and he urged governments to play their part.

“All of these things – advances in health, in education, in agricultural productivity, in energy – won’t happen on their own. They can only happen in the context of governments that function well enough to enable them,” he said.

Gates concluded his lecture by insisting he believed that Africa could achieve the future it aspired to.

He said Africa’s young “believe in themselves, and they believe in their countries and the future of the continent”.

“The priority now is to make sure they have the opportunity to turn those beliefs into action. Because young people with this sense of purpose can make the difference between stagnation and more and faster progress. Nelson Mandela said, ‘Young people are capable, when aroused, of bringing down the towers of oppression and raising the banners of freedom.’ But our duty is not merely to arouse; our duty is to invest in young people, to put in place the basic building blocks so that they can build the future. And our duty is to do it now, because the innovations of tomorrow depend on the opportunities available to children today.”