Sign in
Home NEWS Wizkid, Davido, Kenny Blaq, Nancy Isime, others are winners at The Future... 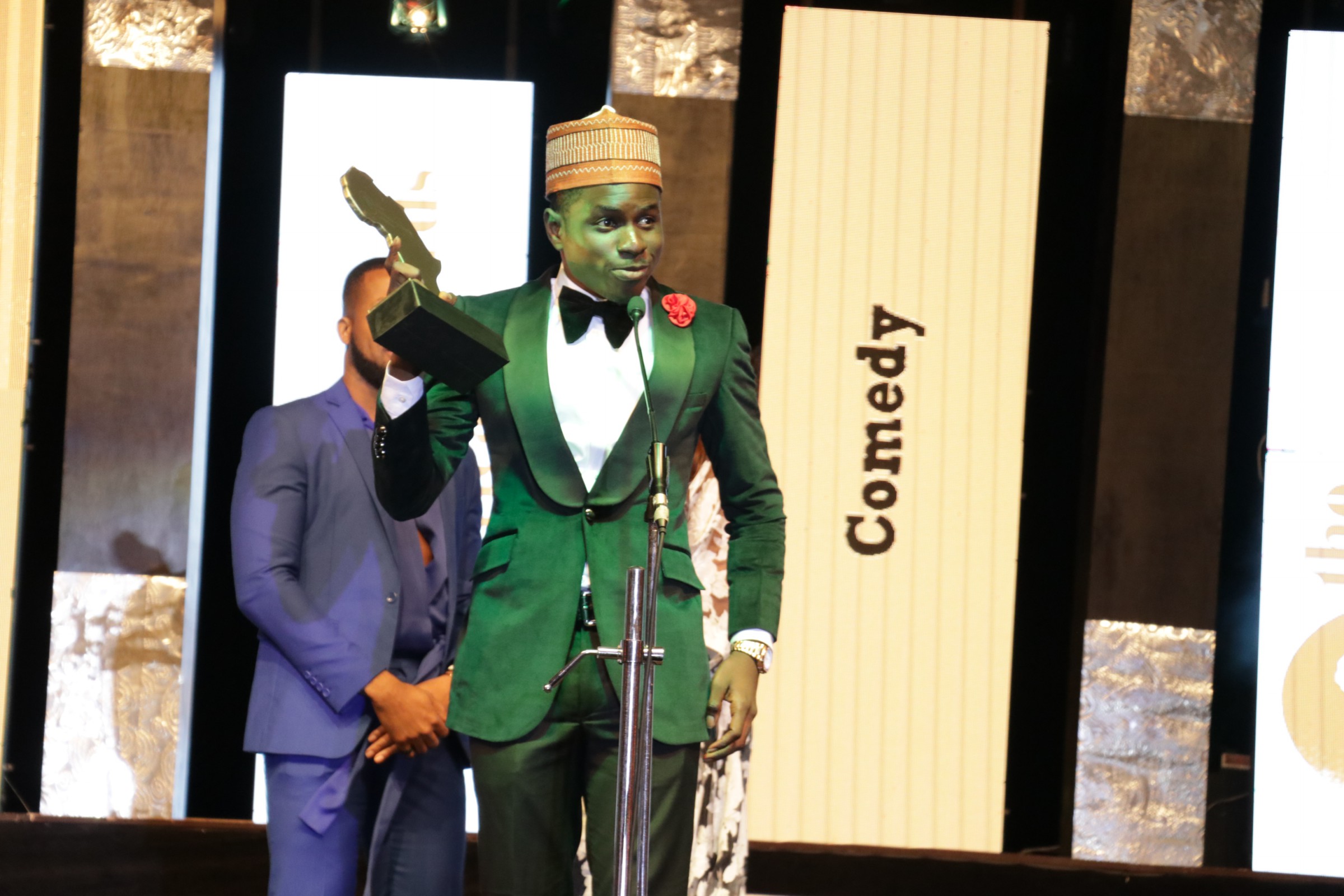 See the full list of winners and their profiles below:

After qualifying as a British solicitor specializing in industry law across several platforms, she set about the task of helming the consolidation of startup businesses in Nigeria.

Bada has set the tone for Black Friday events in Nigeria, planning and organising the Jumia’s 2015 Black Friday giveaway. Her superb handling earned her strong praise and proved that she was relentless even in stressful situations.

Kenny Blaq is unanimously regarded as Nigeria’s most in-demand comedian due to his sold-out shows globally.

His anecdotal style, peppered with excellent music, which Blaq performs himself, speaks to his discipline as an artist, his impeccable comedic timing and his respect for his audience, particularly the women therein. He proves there is a way to do comedy without resorting to grotesquery.

Adebayo’s work has been reviewed by several publications such as Vogue, Guardian UK, The New York Times, The Financial Times, Essence, Guardian Life, Chicago Tribune, and The Wall Street Journal. She is the recipient of fellowships and support from institutions including Ox-Bow School of Art, Ledig House, Sinthian Cultural Institute and Hedgebrook.

With translation rights acquired in 13 countries and a loyal following, Adebayo has become a bright new voice for contemporary fiction out of Nigeria and voice for women everywhere.

THE FUTURE AWARDS AFRICA PRIZE FOR EDUCATION; ENDOWED BY THE UNIVERSITY OF SUSSEX

Pass.Ng, a web, desktop and mobile based CBT examination prep and testing platform created by Late Samson Abioye, Oluyemi Imole and Akanji Gideon has bridged the gap by addressing education through computer literacy.

Pass.ng originally started testing only for JAMB but several other tests have been added. As of August 2017, over 80 million tests have been taken on the platform. The exponential growth of the company attracted like Facebook, Wechat, Airtel, MTN and 9mobile in different capacities. In 2017, pass.ng helped 400 students from Makoko prepare for their exams and 230 of those students were successful in the UTME examination.

Eromo Egbejule has become somewhat synonymous with in-depth, exhaustive journalism in Nigeria, a feat in a country run over with copy and paste gossip bloggers regurgitating unverified gossip for a quick payout. He is unafraid to travel into the heart of conflict for a story but is just as much at ease chasing down the history behind illusive Nigerian vinyl records.

In 2016, his article “Streams of Fortune: How Indigenous Firms are Working to Make Music Streaming Mainstream in Nigeria” was nominated for the Maggie Eales Young Journalist Award at the 2015 CNN Africa Journalist Award, underlining just how much ground Egbejule had covered for 26 year old journalist operating primarily out of Nigeria.

THE EDWIN GEORGE PRIZE FOR PHOTOGRAPHY

Her journey into photography started at The Future Enterprise Support Scheme (TFESS) and since then, her career into the photography industry is admirable. Since Eguare started professionally documenting weddings as a Wedding documentary and portrait photographer in 2013, she has grown exponentially, photographing 100 weddings in 200 plus weeks and rebranding to better suit her new image as an in-demand photographer.

Speaking up on rape was somewhat a taboo until three years ago when Ayodeji decided to change the narrative and create a platform where victims of rape could speak up and receive help. Stand to End Rape Initiative, a not-for-profit organisation creating awareness and changing community perception on sexual violence and providing psycho-social support to victims.

With her personal funds, her organisation has assisted over 250 victims with medical, post-traumatic, legal aid and empowerment assistance. Stand to End Rape Initiative is undoubtedly the most recognised and significant youth arm working to advance end gender-based violence in Nigeria. Ayodeji has worked in over 40 communities across Nigeria speaking against FGM, rape, teenage pregnancy and working with stakeholders to end the scourge.

Along with his team, Kraks TV became both loved and vilified, but ultimately inescapable. Bakre seeks to replicate this incredible success in other new media platforms through a private diversification programme that sees the company move towards the app ecosystem.

In the last one year, Kraks TV has moved from just an online media platform, and grown into a Digital Marketing Agency, started our e-Radio, e-food channels and now have a full Ltd company with a growing workforce and clientele. Kraks has also established a UK arm in a bid to connect Africa and Europe through comedy.

Sambasa was a model while studying Creative arts at the University of Lagos, before he finally transitioned full time into acting. He made his debut in the multiple award-winning movie ‘A Mile from Home’, produced and directed by Eric Aghimien.

Dada Olabisi Mary’s job as a nurse at the Catholic Charitas Foundation of Nigeria, St. Dominic Catholic Hospital Chapter has challenged this notion for her and proven to herself that there are depths of service that only true empathy can plumb.

Her work with expecting mothers has also proven challenging but rewarding and being able to offer early diagnosis to 55 women with history of hypertension and guide them towards safe deliveries one of the highlights of her year. Dada Olabisi Mary is a modern day Nightingale, and hopefully her bushel is never hidden.

In the years since KweKowe launched SlateCube the number of students who return to the platform eager to master the online courses have increased.

Kwekowe’s 3000 monthly visitors are only a start for him. His plan is to produce 1.2 million Africans whose education is greatly supplemented or provided as whole by Slatecube, and to that end the team has already organized up-skill conferences in Nairobi, Kenya and Gaborone, Botswana.

Adetola Adeleke began the Green Fairy Farms in Epe in response to the dearth of technologically savvy farming practices and profitable agriculture in the Epe region. With Green House technology, the farm offers agropreneurs the ability to regulate the climate within their ‘glass’ houses and grow a variety of crops that otherwise would not thrive in certain climates.

Her time studying journalism in the University of Belfast and Media production at the Lewisham College provided her insight that she turned to her true passion, beauty. She was one of the first Nigerian beauty entrepreneur to properly harness the power of social media, turning to then new image sharing platform Instagram, to build a following.

She was one of the first Nigerian beauty entrepreneurs to champion a ‘signature’ style; her cutting edge approach to make up, specifically the often hard to pin-down on-trend brow, earned her the name Anita Brows and made her the go-to beauty expert for celebrities like Annie Idibia, Vimbai Muthinri and Stephanie Coker.

THE FUTURE AWARDS AFRICA PRIZE FOR FASHION AND DESIGN

As a second generation designer introduced to the art by an aunt, Lady Biba started making clothes to fill a niche; the struggle to find work appropriate clothing that also flatters the silhouette of the weather while impressing her counterparts.

As a writer, she has taken her fashion related knowledge and her perseverance and shaken them up into a cocktail of success, and a brand that is basically scripture among young working women.

Timilehin Bello’s company Media Panache Nigeria has a team of 10 PR experts and boasts a wide range of adulated clients both in the corporate and entertainment industry – some of the corporate clients include: Bank of Industry (BOI), Ribena, Billionaire Bet, The Velvet Expression, MTNF, St. Ives Hospital, Jumia Market, Jumia Food, WhoGoHost and Simplified Corporate Logistics.

In mid-January 2017, Timi’s company kicked off a campaign entitled ‘Inspire Youngsters’. The campaign was targeted at secondary schools in Lagos state and commenced with Christ the King International School situated at Gbagada; where a number of thought-provoking topics, including the appropriate use of social media were discussed by the CEO, Timilehin Bello.

With roots in Sagamu, Lagos, Joshua’s family relocated and naturalised in the UK. Joshua began representing England as an amateur boxer competing in the super-heavyweight division and represented Britain at the 2012 Olympics where he won a gold medal.

In 2014 he went professional and began to compete in pro-boxing competitions, quickly rising up the ranks and winning the British regional heavyweight titles in 2015 and 2016. Joshua faced Charles Martin the world heavyweight champion on April 9th 2016, and won with a surprise knock out in the second round, making him the world heavyweight champion. He also beat world champion Vitaly Klitschko in a TKO, cementing his place as the world’s best active boxer. Joshua retired temporary in late 2016, before making a comeback in March 2017.

THE FUTURE AWARDS AFRICA PRIZE FOR ON AIR PERSONALITY (VISUAL)

Isime has quickly become one of the most readily recognizable faces on television, valued for her quick wit and her dexterity while drawing out her guests and getting them comfortable in front of a camera.

Such skills has become extra valuable when Isime has to work a camera either as an actress in one of the feature films she is attached to, or as an in-demand actress on the small screen.

THE FUTURE AWARDS AFRICA PRIZE FOR ON AIR PERSONALITY (AUDIO)

Tisan Bako’s voice has become instantly recognizable to evening commuters who rely on him to provide them news, information, music and companionship as they return home from their diverse days and he has become so good at his job that he is often the only On-Air personality out of Northern Nigeria to be constantly rewarded for his excellent work as a presenter in National and International entertainment awards. He has been nominated thrice for the Nigerian Broadcasters Merit award in 2014 and 2015, winning once, and has been nominated for the Nigerian Entertainment Awards in 2015 and 2016 winning once as well.

His first album “Omo Baba Olowo” quickly gained mainstream success and marked a significant turn in his career. In 2016, he became one of the new crop of Nigerian born musicians to sign lucrative record deals with international music labels.

Never one to be guided by fear, Davido cut ties with his label after a year and returned to Nigeria to rediscover his sound and audience in his old stomping grounds. His single “IF” catapulted him to realms of fame that no one thought possible and brought the international recognition he’d rejected the year before, but this time on this own terms.

When she started her business Trendy Bee events in 2012, Borha had just left her position as an operational staff at Cotecna Destination Inspection. Working there had introduced her to the thrill of event planning and offered a network of vendors and associate industry professionals, a portfolio that came in handy when she established her own outfit.

In five short years, Borha’s Trendy Bee Elite Events has risen to become one of the most respected event management companies in the country managing events in Dubai, Vegas, London and Zanzibar.

THE FUTURE AWARDS AFRICA PRIZE FOR YOUNG PERSON OF THE YEAR

Wizkid’s 2017 album under RCA records “Sounds from the Other Side” was well received by international music critics and charted favourably across the world. Building on that success he was recently nominated for Best International and Best African act at the 2017 Europe Music Awards, and he returned to Nigeria in November to receive the award for best male artist at the Africa wide Afrimma awards