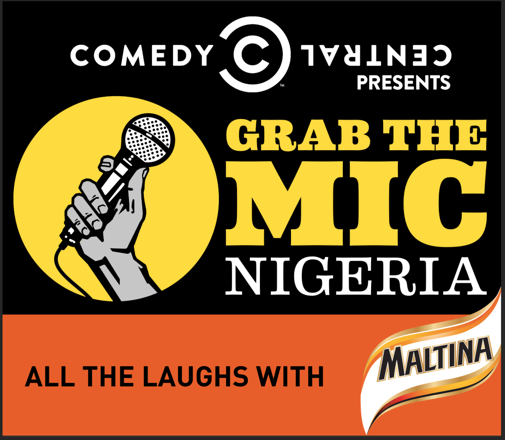 After a rigorous selection process from the regional auditions in Lagos, Port Harcourt and Jos, Comedy Central Grab The Mic judges have selected 6 contestants for the grand finale.

A lifeline has been thrown open to six other wildcard contestants as viewers of Grab The Mic will get to choose one contestant from the wildcard category to will join the final 6 contestants for a coveted spot at the Grand finale.

Viewers can vote for their favorite wildcard contestant by heading to www.facebook.com/MaltinaNigeria or www.comedycentralafrica.com .

“Grab The Mic auditions holding in Nigeria have unveiled some of the most talented entertainers in the country. It has proven to be a perfect platform to a showcase raw African talent at its best and we wish the finalists luck as voting begins.”

Following the regional auditions, the grand finale which holds in Lagos on December 2nd will see one winner take home the grand prize of N1.5 million cash prize and a chance to share the stage with veteran comedian, Alibaba.

Comedy Central Grab The Mic is a comedic talent search aimed at discovering and grooming the next generation of budding comedic talent. It is Comedy Central’s first ever-live activation in Nigeria. The campaign is carried out in partnership with Maltina.