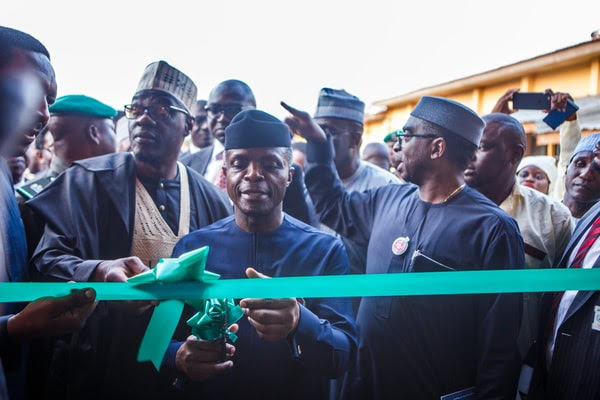 Mr. Ayo Olajiga, Co-Founder/CEO of FoodPro Limited, guided the Vice President on a tour of the factory showing the different stages of the cashew processing from sizing and boiling, shelling and scooping, to drying and peeling and finally grading and packaging. The importance of cashew processing to economic development cannot be stressed enough as it creates sustainable jobs (both direct and indirect) and leads to overall increase in the value of the cashew sector.

The Vice President was extremely impressed by the factory and the commitment to adhering to global standards. He expressed this administration’s resolve to support the private sector with policies that would aid local businesses.

Speaking at the commissioning, Mr Olajiga said, “Through domestic processing of raw cashew nuts, we have created more than 400 direct jobs and several thousand indirect jobs for farmers, vendors, suppliers and artisans who form the heartbeat of FoodPro’s value chain. With 90% of FoodPro’s employees being women, we are humbled by the role we play in impacting communities and improving economic and social development conditions in our host community.”

FoodPro is particularly grateful to the Federal Government of Nigeria acting through its agencies the Nigerian Export Promotion Council (NEPC) and Bank of Industry (BOI) both housed under the Federal Ministry of Industry of Trade and Investment (FMITI). Over the years, NEPC under the leadership of Mr. Olusegun Awolowo have worked relentlessly to help FoodPro gain valuable market access via local and international trade shows in Vietnam, the United Arab Emirates and the United States of America. In addition NEPC from time to time has provided us with export related training. The BOI provided the funding used to acquire our machinery and continue to support our efforts to effectively operate the factory.

FoodPro Limited has been in operation since 2013 and recently ramped up its capacity from 1,000 to 5,000 tonnes of raw cashew nuts per annum making it the largest locally owned cashew processing company in Nigeria. In addition, FoodPro’s factory is the only factory certified by the African Cashew Alliance for Food Safety and Quality.

In the near future the company plans to double its operating capacity further to 10,000 tonnes, commence export of packaged and branded goods, including existing brands – Lion Cashew & Go Nutz as well as a range of additional products that are currently in the development phase.