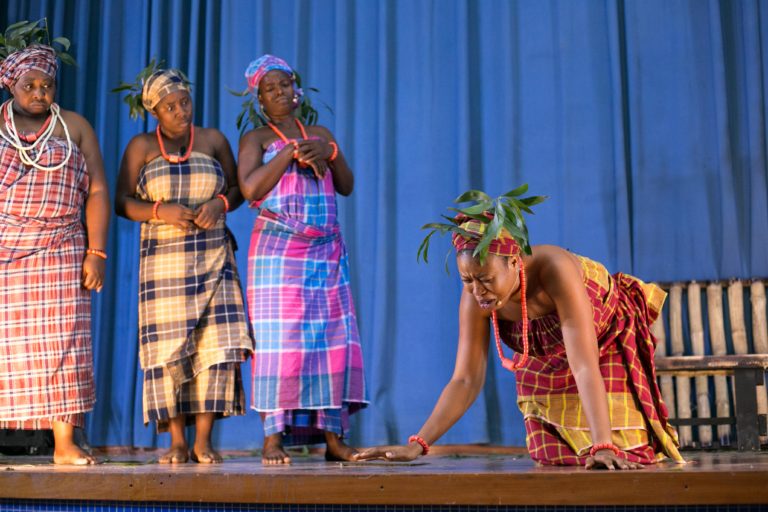 The stage play, ‘The August Meeting’ showed in Abuja as part of its 10-show tour after a successful premiere in February. Followed by applause and appreciation from the Lagos leg of the tour, the play was welcomed with a large enthusiastic audience.

Brought to life by the refined cast of Gloria Anozie-Young who plays the lead role of ‘Nwayereuwa’, Inna Erizia, Odera Orji , Ijeoma Aniebo, Bella Rose Iyere-Okojie and Deola Gimbiya, ‘The August Meeting’ follows the return of the women from the Aba Women’s Riot to challenge their social standing in the society.

Sponsored by The Ford Foundation, ‘The August Meeting’ had a perfect combination of severity and laughter played out by ‘Nwanyereuwa’ and ‘Mgbeke’ respectively.

The Abuja show was graced by the Norwegian Ambassador Jens-Petter Kjemprud and Agnes Zephaniah whose great-grandmother took part in the Aba Women’s Riot; also in attendance was The Azigbo Community of Abuja and students of Deo Gratias International School, Abuja to mention a few.

“It was a brilliant way to highlight all the themes affecting women”, said Dr. Nwangwu – UNICEF.

Held in Shehu Musa Yar’Adua Centre, the play had well over 250 people in attendance. The audience was impressed with the preservation and transfer of the historic event, the Aba Women’s Riot to our present day and the celebration of our past female heroes.

“The play sheds more light on feminism, feminism is not all about fighting men or being at loggerheads with them but as women, there are roles we have to play in order to grow”, said a member of the audience.

Produced by Raconteur Productions, ‘The August Meeting’ would be coming to Awka, Owerri and Aba on November 29th, December 1st and 2nd respectively.

For more information on tickets go to www.augustmeeting.com