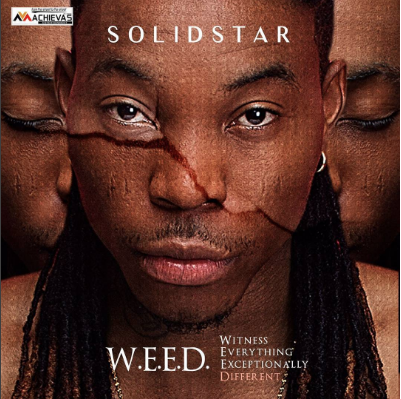 Achievas Entertainment afro-pop superstar Solidstar has revealed on social media; the cover art and track-list to his much-anticipated album ‘WEED’ set to drop on October 31st 2016.

The ‘Wait Refix’ singer took to his Instagram on October 27th 2016 to reveal the visually appealing album cover.

On the cover, the singer’s face can be seen tripled with a conspicuous crack on one of the faces; indicating a rather figurative representation and meaning to it.

Accompanied with album cover, the songster wrote, “This moment right here; is incredibly special to me. This is a moment that would go down in history! I am beyond proud to show the world; especially my amazing fans the body of work I’ve dedicated ample amount of time and effort to…I present to you; WEED album cover. I can’t even begin to express the amount of joy my heart abounds right now – I just want you all to get a feel of this amazing body of work. For now, all I can say is; this is an appetizer for what’s set to come! Anticipate the release of #WEED; Witness Everything Exceptionally Different”.

Following the announcement, Solidstar took to his Instagram yet again; on October 28 2016 to reveal the tracklist to the album; further escalating anticipation among his hankering fans.

The tracklist has a whopping sum of 21 songs and boasts an eclectic list of some of the most talented acts in the industry, including fast-rising singer Mr. Eazi, indigenous rapper Reminisce, veteran singer 2Face, dancehall singer Timaya, popular Tanzanian singer Diamond Platnumz, highly sought-after rapper Falz and a host of other talented artists.

Solidstar first revealed his plans to drop an album sometime in January 2016 – an album he has described as “one of the most phenomenal body of works” of 2016. The singer revealed the actual meaning of the album title ‘WEED’; elaborating it is an acronym representing the phrase; ‘Witness Everything Exceptionally Different’.

The songster has joined the number of artists expected to drop their albums before the end of October, including Tekno, Phyno, Ice Prince and several others.