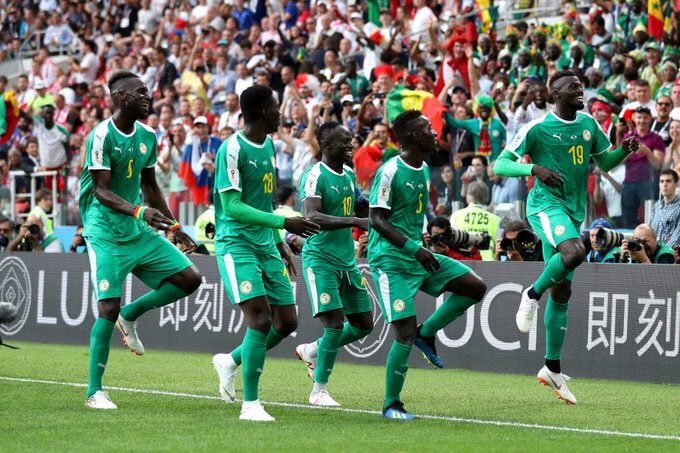 Securing Africa’s first win, the Senegalese national team did the entire continent proud when it beat the Polish side 2-1 in the group H game at the ongoing 2018 World Cup in Russia.

The first goal came in the 37th minute after Senegal’s Idrissa Gueye fired a shot that was assisted into the net by Poland’s Thiago Cionek making it an own goal. In the 60th minute, M’baye Niang led the team to victory with an unexpected goal that has now saved Africa.

Nigeria had earlier lost its first group match to Croatia with 0 goals to 2 while Morocco lost to Iran and Tunisia to England.

This is the true spirit of African football. Thumbs up #SEN and hope this victory will inspire Nigeria, Tunisia, Morocco and Egypt. An African team for the semis. RT if you believe #POLSEN #NokiaMobileOnAndroid

Senegal brought the Wakanda spirit to the World Cup #POLSEN

Thank you Senegal for not disgracing us like other African Countries. #POLSEN

A black Coach won Africa’s first match at the #WorldCup with Senegal #POLSEN by My country Nigeria prefers a foreign coach who is not better than our indigenous coaches and we also prefer to make our cloths abroad!

News of the death of controversial rapper, XXXTentacion filtered through news sites and social media in the early hours of Tuesday and since then, conspiracy theories and fake news have flooded the internet.

The rapper, real name Jahseh Dwayne Onfroy, who had been the subject of criminal accusations most of his life was shot dead in a robbery attack on a motorcycle shop at about 4 pm on Monday. He was later pronounced dead by the police.

Following his death, social media users have shared an Instagram live video where the 20-year-old somewhat predicted his own passing and mentioned how he would like to be remembered.

Following his history of abusive behaviour especially against women including aggravated battery on a pregnant woman, some social media users opined that the rapper deserved to die.

R.I.P @xxxtentacion No one can be so self-righteous that they are happy when a youth dies. The young still have the capability to reform. God bless the kids. #xxxtentacion

For the record, I was never in support of his ways, especially his domestic abuse which I found to be horrific. But I will never demonize an individual without criticizing the society and/or circumstance in which they were raised. Especially someone under 21.

For those who are so woke that their compassion is asleep, remember this…if Malcolm X was killed at the age of 20, he would have died an abuser, a thief, an addict, and a narrow-minded depressed & violent criminal. So, I believe in change for the young.

As I’m watching people make @xxxtentacion a martyr, I pray that we recognize the women enduring sexual assault & domestic abuse around the world. They are the true martyrs & heroes. While I‘ve expressed compassion for troubled youth, I salute women worldwide

A number of social media accounts have also claimed that the rapper is still alive.

Photo of the day?

This image of former Vice President, Abubakar Atiku and national leader of the APC, Bola Tinubu hugging and laughing at the Akure airport made it to the internet today. Is this a political alliance in the works?