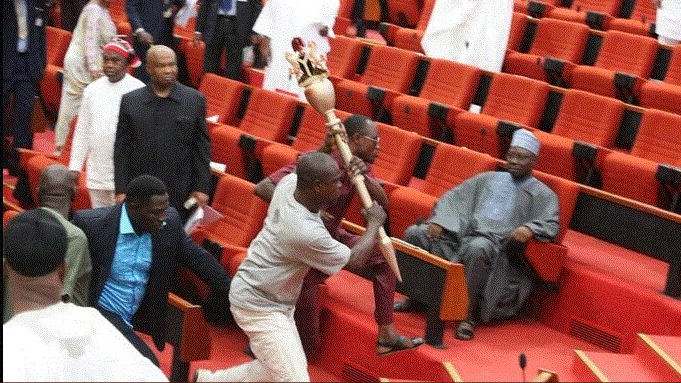 It was a heist, guys!

Nigeria’s National Assembly today witnessed major drama when suspended Senator, Ovie Omo Agege stormed the upper chamber with a group of thugs with the sole mission of stealing the symbol of authority in the House.

As it is clear that plenary could never proceed in the absence of the mace, the Senator and his gang snatched and successfully made away with it, despite confrontations by security.

The disgruntled Senator, who was handed a 90-day suspension only last week for his pro-Buhari stance, was later arrested by the police.

The photos and videos from the incidence are sadly the most hilarious things on the internet today:

In the heat of the mace drama, Senator Shehu Sani representing Kaduna Central in the House took to Facebook to share he had to sacrifice his belt to be used in place of the mace, so plenary could continue.

We’re not sure if he deserves gratitude for this but history will never forget the day a man’s belt had to serve as mace in Nigeria’s National Assembly.

BBNaija’s CeeC is the most hated Nigerian right now

Today though, CeeC provoked the ire of social media users after an extended session of verbal assault against fellow housemate, Tobi Bakre.

CeeC and Tobi first became an item on the show when they were paired as strategic partners but eventually fell out after CeeC consistently proved herself a toxic fellow (our opinion).

Four days to the end of the show, CeeC rained insults on Tobi after he expressed to her that he no longer liked her; she earned herself a strike from Big Brother who agreed that her actions were completely unacceptable.

I just watched the most bizarre live recording of #BBNaija. I'm still dumbfounded. One person going on a non stop tirade on another. Surely this must be some sort of abuse. Biggie is quietly nursing a pressure pot and anything that results out of its explosion will be his fault.

I’m not a fan of big Brother but I couldn’t scroll pass these bizarre videos of Tobi being domestically violated! Hope she gets the same purnishment Kemen got last year? If not it’s clear the show is SHIT! #bbnaija by the way #TeamTobi now

One gotta be really careful with those who do not see anything wrong in how CeeC behaves!

If truly, some of you genuinely feel she is right always,then one gotta run away from y'all

The only thing ceec can be used for after the show is replacing Patience Ozorkwo in the Nollywood movies.#bbnaija

If your girlfriend/WCW continues to support CeeC after today, it’s time to sit down and have a conversation with her #BBNaija

Dear Nigerian youth, here’s how your president really feels about you

“About the economy, we have a very young population, our population is estimated conservatively to be 180 million. This is a very conservative one.

More than 60 percent of the population is below 30, a lot of them haven’t been to school and they are claiming that Nigeria is an oil producing country, therefore, they should sit and do nothing, and get housing, healthcare, education free”

Essentially, President Buhari is of the opinion that young Nigerians have nothing to offer but expect everything!