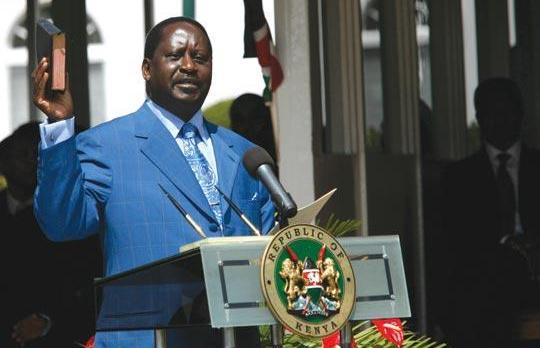 Raila Odinga swears himself in as Kenyan president

There’s a political situation in Kenya that can be safely described as treason and can lead to a civil war, if not managed.

Opposition leader, Raila Odinga today inaugurated himself as Kenyan president at a swearing-in ceremony that was attended by thousands of supporters of the opposition party.

Odinga ran in the 2017 presidential election that saw President Uhuru Kenyatta emerge as winner. The election was nullified following claims it was riddled with irregularities. In a rerun election that Kenyatta won again, Odinga dropped out of the race citing “lack of electoral reforms” as excuse.

Kenya’s “second” president, Raila Odinga has updated his Twitter bio to read, “This is the official account of His Excellency Raila Amolo Odinga. Sworn in as the People’s President on 30/1/2018”

Well as they say, two heads are always better than one!

Sorry Guv, you need to do better next time

We know #BBNaija is the most trending thing on social media in Nigeria right now and as many individuals and brands want to ride on the trend.

But for a governor to make a very lazy attempt as using the BBNaija hashtag to pass a message, nahh… it doesn’t gel.

#BigBrotherNaija is good and I commend the ingenuity of our youths but the future is not #BBNaija3, it is in your hands dear Nigerian youths.

Go and get your #PVC

Dear Governor Dankwambo of Gombe, no one said the future of the country lies in a reality show. No one. Just preach your PVC sermon and be going. Leave our Big Brother alone.

Only three hours after wishing his son Maximiliano Adedeji a happy birthday on Instagram, rapper Olamide shared another message pointing to the fact that his mum had passed.

We pray for strength to pull through!

Now you know this is so true!

Nothing truer has been said…

What’s the deal in your church? Tell us.