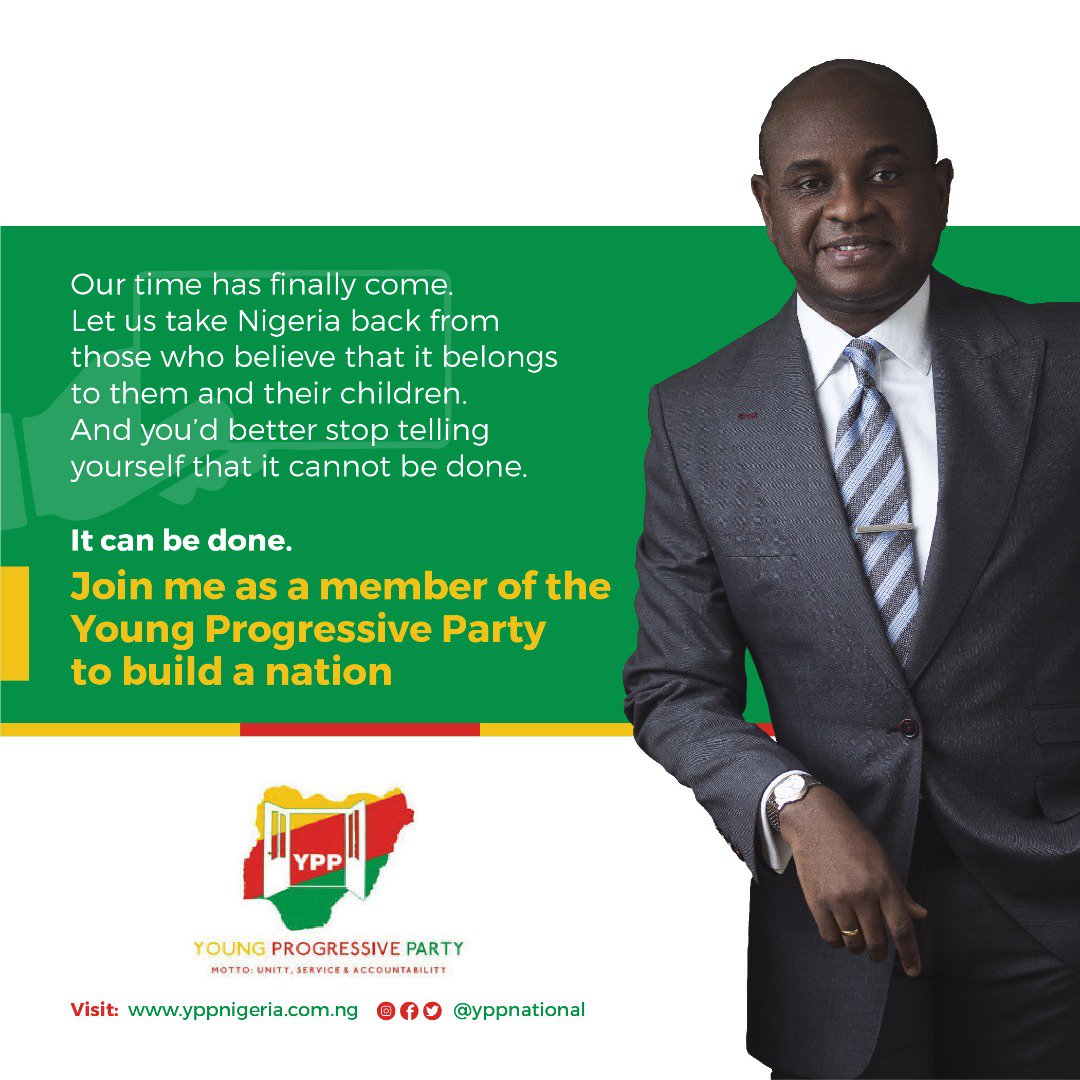 Professor Kingsley Chiedu Moghalu, the 2019 presidential candidate and former deputy governor of the Central Bank of Nigeria, has announced his intention to contest under the umbrella of the Young Progressive Party (YPP).

Moghalu called for a bold response among Nigerians to join the party so as to usher in a new leadership and political order in the country.

The former United Nations official made the announcement as he declared his formal entry into the party during an event at the Nicon Luxury Hotel, Abuja today, 24 May, 2018.

Speaking on his aspiration, the presidential candidate explained that despite invitations from various political parties to contest the 2019 election, his vision for a radically new political leadership for Nigeria – one with a vision and the capacity to build a new and different future for the country – led to an automatic choice to separate himself from the old order of failed and recycled politicians that have run Nigeria aground with poverty, insecurity and corruption as its national legacy.

“Would the party I join share my vision of leadership as one of service and accountability? Would it be focused on the youth and our future while inclusive in its membership? Would it be nationwide in its spread and appeal as opposed to an ethnic or sectional focus? And would the party, from the standpoint of electoral strategy, be a viable platform with a structure to prosecute the struggle for a New Nigeria that is focused on the future and not the past?” he asked, raising several points on his decision to join the new party.

Professor Moghalu explained that due to these reflections, the Young Progressive Party became the right choice for him, a decision further re-emphasized through detailed consultation, a wide-ranging accumulation of data and information across the country and across a series of hard-nosed operatives, thinkers and doers.

“The Young Progressive Party is a great dare, a tantalizing promise, a notice of evacuation to Nigeria’s recycled political class. So I am here today to announce that in response to the parties of the past, in response to umbrellas that block out the light of hope, and brooms that sweep away truth and replace them with lies, in response to the parties of tired old tricks and tired old systems and tired old men, I and millions across Nigeria will choose the Young Progressive Party – YPP – the party of today and tomorrow,” he said.

Calling on all Nigerians of voting age to join the party, the Young Progressive Party presidential flagbearer beckoned to those who are tired of the status quo to also contest under the party in order to work collectively and address Nigeria’s socio-economic issues.

“The Young Progressive Party has over the past year set up full and final structures – extensive offices, with an extensive pool of party officials, operatives, volunteers across the country. This is a grassroots-oriented party. Matched with our historic network and cell leaders across Nigeria in every one of the 6 geo-political zones of the country, this is a union made in possibilities,” he stated.

Describing it as a powerful symbol of the revolutionary campaign he has chosen to run, Professor Moghalu called on Nigerians to act on their dissatisfaction by disgracing those who believe that Nigeria belongs to them and join him in order to remake the political realities of the country, and choose the path that represents immense possibilities and solutions for the suffering masses.