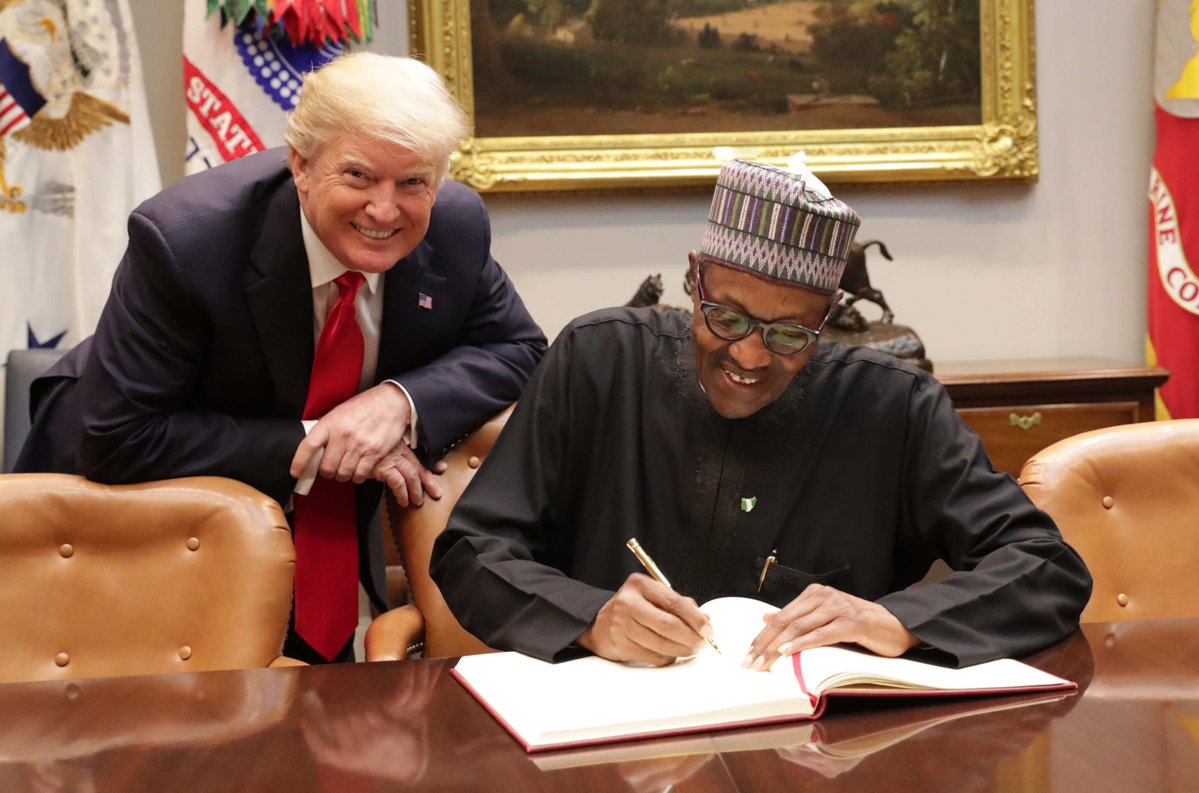 President Buhari meets with US President Trump at Oval office

The two held a bilateral meeting where they discussed the fight against terrorism, with President Buhari seeking America’s support in fighting the insurgency that has plagued the nation for nearly a decade. He also added, “Nigerian military is involved in projects to reintegrate Boko Haram members into the community with Operation Safe Corridor. We appreciate whatever support we can get from US”.

The leaders later went on to hold a joint press conference where President Trump announced that “Nigeria is a valued partner and good friend”. He also added that he would like to visit Nigeria, calling it “an amazing country”.

This comes after the attack on a church in Benue that led to the killing of scores of worshippers including two priests.

The presidential media team have said this is the first time United States President Donald Trump is meeting with a leader from sub-Saharan Africa.

Common sense advocate, Senator Ben Murray-Bruce today shared a fresh version of the events of April 24, 2018, that led to the escape and later detention of Senator Dino Melaye in a hospital ward.

Last week, reports of Senator Melaye jumping out of a police van in an attempt to resist arrest filled the news space but now, Senator Murray-Bruce has provided an all-new perspective to the story.

According to him, the police gassed Senator Melaye twice while he was being transported in their van leading him to bolt for freedom after he nearly lost his breath.

Just met with @dino_melaye. Very sad to hear what transpired. Dino is asthmatic, yet while in transit, the police gassed him & he could barely breathe. Second time they gassed him, he had to force his way out of the vehicle. Dino literally escaped death. SAD!

True story or not, here’s how Nigerians reacted to this very interesting version:

The Police must be very wicked to have gassed themselves, Dino and the driver of the car? They should be charged for attempting to commit suicide and murder of Dino…….

Nigerians have been complaining and protesting about police brutality for years and you distinguished senators of the hallowed chamber did not even bat an eyelid towards our plight.I’m delighted this happened to Senator Melaye, hopefully it happens to more senators. Do something!

Sir, have you heard from the police or is this a one sided story? You saw the video of your fellow senator threatening to kill himself and implicate the police. How is it that they gassed him and it did not affect them? Did the police have gas masks on. #CommonSense is not common

Either way, we must put an end to police brutality.

How Davido and his girlfriend, Chioma caused a stir on Twitter today

…simply by putting their relationship on display last night!

Award-winning hitmaker, Davido held a pre-birthday party for his girlfriend, Chioma last night and as fans woke up to video clips from the event, it seemed as though the couple had unknowingly rewritten relationship standards.

Suddenly, the Davido and Chioma type of love became the acceptable type, better known as ‘goals’.

Davido is doing his own for Chioma and y'all think he's the most romantic guy on earth… Someone has been doing this all their life and people be calling him Mumu while the girl also is not taking him serious.