Sign in
Home FEATURED President Buhari has failed the people of Benue; Trump to announce “dishonest... 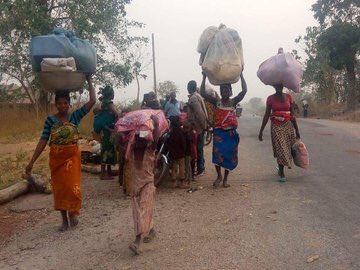 Over 20 people were reportedly butchered to death by Fulani herdsmen in Guma and Logo local government areas of Benue state between Monday and Tuesday.

It’s the most terrible way to start a year and locals are reportedly fleeing their homes in fear of another bloodbath. Others who have nowhere else to go have taken to the streets in protest. There is an upheaval in Benue at the moment, the state governor Samuel Ortom is calling for the Federal Government’s intervention and President Muhammadu Buhari’s silence is deafening.

These terrorist herdsmen belong to the president’s clan and his inability to take decisive action against them shows his weakness and much more. Here’s how Nigerians are reacting:

Someone help please! Benue is on fire. Buhari brothers called herdsmen are killing us left right and center

20 people were killed in Benue by Fulani herdsmen, this people are getting more emboldened simply because they are seeing the body language of President Buhari.

Non of them has been arrested, killed or jailed by president Buhari.

Enough of the killings, Buhari has to go

The killings in Benue is a shame on us all, a supposedly modern country. A country takes care of its people. This country only takes of its govt.

The chest of our rulers only shows when 'treason' and 'oil pipelines' are in issue. They do not care when our lives are the issue.

What could be more shocking!

We all received this piece of news with relief and everyone is happy the state police command made headway with this one.

The leader of cult group, Badoo that are infamous for ritual killings in the Ikorodu area of Lagos and some parts of Ogun has been arrested. The police raided his shrine and took him away in handcuffs while the state government has proceeded to seal properties including a fuel station, hotel and events centre belonging to the man.

Major @PoliceNG breakthrough against the Badoo Cult in Lagos. pic.twitter.com/114uIz8gYr

Two major fast food chains are throwing shots at themselves on Twitter and we’re so here for it.

If nothing, this sort of banter helps them to drive conversation and convert new customers so thumbs up, McDonalds and KFC, keep up the savagery.

McDonald’s leader Ronald just stated he has a “burger on his desk at all times”. Will someone from his big shoed, red nosed regime inform him that I too have a burger on my desk, but mine is a box meal which is bigger and more powerful than his, and mine has gravy! #nuclearbutton

Have a good night!