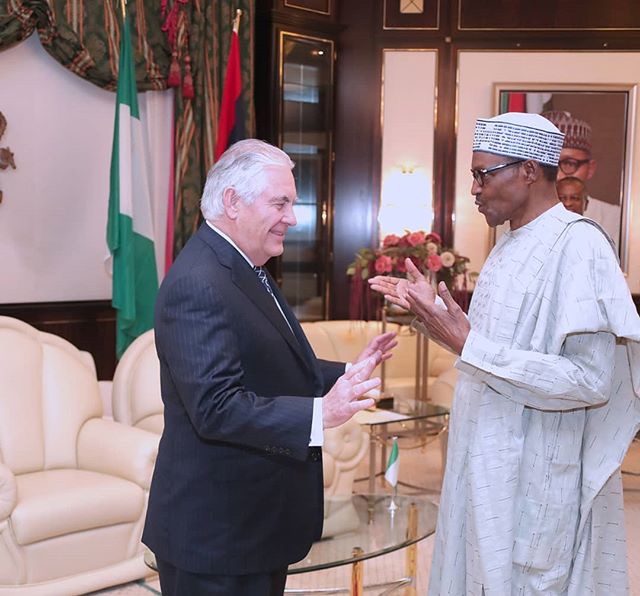 President Buhari met Tillerson later in the day after he paid his first visit to Benue following the continuous attack on locals by Fulani herdsmen.

See photos from the visit:

At the meeting, President Buhari made it known that his administration will not be going the military route in getting back the 110 abducted Dapchi school girls.

In a statement by Special Adviser on Media and Publicity, Femi Adesina, the President was quoted, “We are trying to be careful. It is better to get our daughters back alive,”

President Buhari announced that he will be visiting Dapchi later in the week.

It was a big weekend for world favorite Marvel film, Black Panther as it crossed the $1 billion mark making it the fifth Marvel movie in history to hit that mark.

Black Panther has been in cinemas less than a month and it is already the first film to hit that milestone across the world.

Plus this amazing news, we also hear a sequel is already in the works. Well, Wakanda Forever then!

James Blunt does not only have the sweetest voice, he’s the best at sending pointed tweets too.

His response to American singer, John Mayer’s tweet earlier today not only reminds of his classic tune, Beautiful, it also seals Blunt’s status as next to none in firing shots.

If you’re pretty, you’re pretty; but the only way to be beautiful is to be loving. Otherwise, it’s just “congratulations about your face.”

Don’t believe everything you read on the internet

If you want longer lasting erection , drink a lot of water hours or minutes before sex

4 minutes. I lasted 4 minutes. You Twitter people are liars https://t.co/ngrU5p1xhp