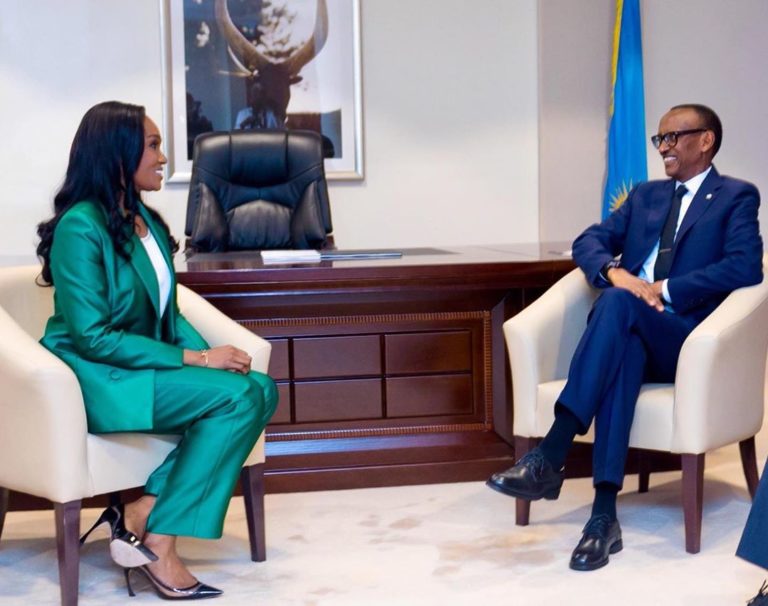 Rwandan President, Paul Kagame and Globacom’s Executive Vice Chairman, Mrs Bella Disu, on Monday began discussions on the use of digital technology to help the march towards economic prosperity in Africa. The two leaders held a private meeting after the opening session of the two-day Africa CEO Forum taking place in Kigali, Rwanda.

Globacom could use its massive infrastructure, including the Glo 1 international submarine cable, to drive digitalization on the continent.

President Kagame said Africa’s hopes of achieving regional integration and economic growth would not be realized without modern technology. He also commended the success Globacom has made.

The Rwandan leader who had in his opening remarks at the forum called for “open, responsive and accountable governance” on the continent, said the private sector was critical to growth because of its ability to “envision on what needs to be changed to achieve desired improvement in the private and public sectors”.

“I commend President Kagame for his exemplary leadership and for the tremendous success Rwanda has achieved under him. Like President Kagame, I have no doubt that greater integration will lead to continental growth and a more prosperous Africa. Globacom is committed to Africa’s economic renaissance,” Mrs Disu stated.

The Globacom EVC also chaired a session on “Women in Business” on the opening day of the forum. She called for more gender parity on the boards of companies and applauded Rwanda’s policy of 50% female representation in appointments as a good model.

“There are no two ways about it, women must continue to advance. After all, we make up more than half of the world’s population.

My charge to women is to keep climbing the career ladder. Climb it anxious. Climb it confidently. But just keep climbing. And when you get to the top because you will – give a helping hand to the women coming behind you – this is how we grow”, Mrs Disu said.