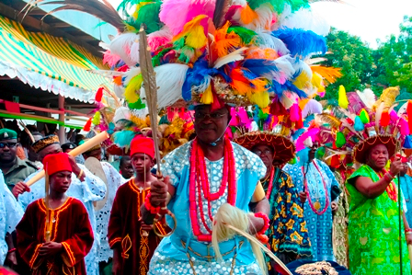 Arrangements have been concluded for the 2019 Ofala of the Obi of Onitsha, His Majesty, Nnaemeka Achebe, Agbogidi.

Rooted in deep spirituality, the Ofala is the highpoint of the Onitsha ceremonial cycle.  It is primarily a celebration by the monarch and his subjects to mark the monarch’s annual emergence from seclusion, during which period he has successfully negotiated the fortunes of the kingdom. The Ofala also marks the homecoming of Onitsha indigenes.

The digital transformation leader, Globacom, has been the official sponsors of the Ofala since 2011.  Globacom’s partnership with the organisers of the festival over the years has helped enormously in projecting the Ofala.

The actual Ofala which is a display of royal dances, tributes, parades and music running over two days, will take place on  October 11 and 12. The scope of the festival has been widened, with various events now part of the celebrations.

In a joint statement issued by the Ofala Steering Committee and Globacom, the 2019 Ofala will not only display the rich cultural heritage of Onicha Ado Nadu, but it will also be ten days of unstoppable fun and entertainment for both visitors and residents.

The statement signed by the Chairman of the Ofala Steering Committee, Chief Ngozi Okafo, the Ogene Onira of Onitsha and Mr. Augustine Mamuro of Globacom, added that, beginning from 2019, the planning and organisation of the Ofala will be undertaken in such a way as to enhance the impact of the festival with a view to ensuring that  it attracts considerable national, West African, and international attention.

According to the statement, both Onicha Ado NIdu and Globacom looked forward to a continued partnership such that Globacom as major sponsor   “would in its usual manner make contributions towards the growth and development of the festival.

Many renowned international marathoners, particularly from countries with road racing records like Kenya, Ethiopia, Ugandan and Diaspora Nigerian elite athletes, have entered for the event.

This will be followed by the Oreze Arts VII, a group art exhibition promoted by His Majesty’s Chimedie Museum Trust Foundation and supported by the National Gallery of Art. The works of 250 artists from various parts of the world are planned to be on display at the show which will run from October 9 to  October 13.  Frank Ugiomoh, Professor of Art History and Theory, Department of Fine Art and Design, University of Port Harcourt will be the special guest of honour at the opening ceremony of the art exhibition.  A panel discussion on the Role of Art in Community Enlightenment, Cohesion and Development will form part of the exhibition.

Panelists include such artists like Tayo Adenaike, Obiora Anidi, and Nneka Odoh. Others are art collector Hakeem Adedeji, and art curator Iheanyi Onwuegbucha.

About 2000 persons are expected to participate in the Ofala Youth Carnival, which is scheduled for Thursday, October 1. Now in its seventh year, the carnival holds under the auspices of the Onitsha Ado Youth Council and showcases the rich cultural heritage of Onitsha.

The activities will be rounded off with a Royal Banquet, organised by Globacom in honour of the Obi of Onitsha. The banquet will be held at the Dolly Hills Hotel, Onitsha, on Monday, October 14.

The Ofala has recently been endorsed by the Nigerian Tourism Development Corporation, the apex tourism Regulatory Agency in the country as a major Nigerian Festival.