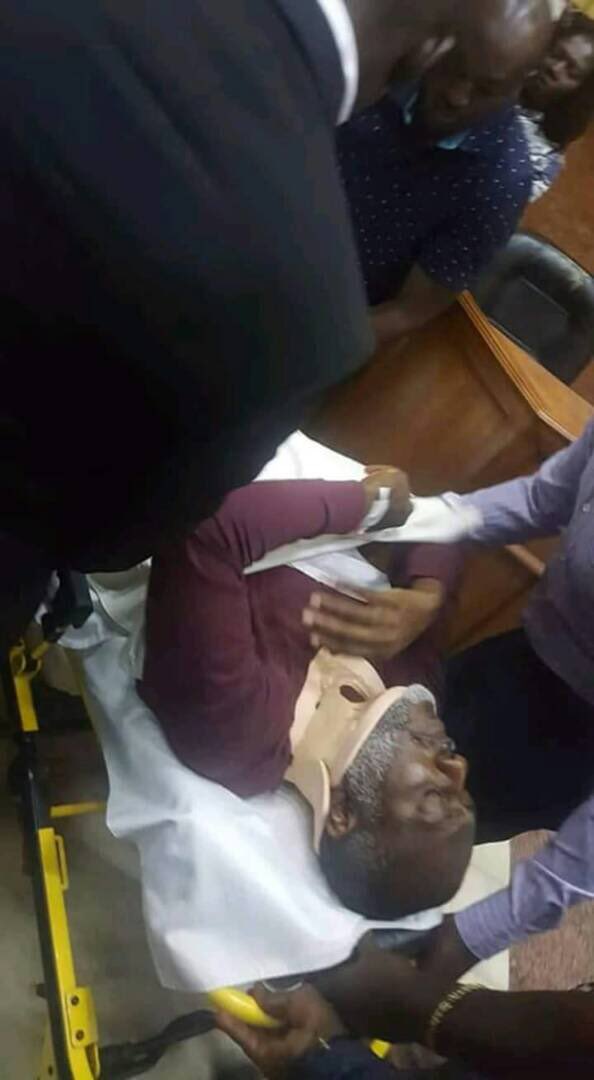 Olisa Metuh’s appearance in court is nothing short of dramatic

Upon the presiding judge’s insistence that Metuh must appear in court despite his lawyer’s claims to ill health, the former spokesman not only showed up on a stretcher but sported a neck collar to perfect the look.

Metuh’s lawyer had earlier sought a long adjournment of his trial after providing his medical report to the court but the judge had refused.

VIDEO: Olisa Metuh’s stage-managed dramatic exit from the Federal High Court on a stretcher after winning a long adjournment for his fraud trial pic.twitter.com/AZ5CYWGG6L

See how Nigerians are reacting:

Olisa metuh is officially the latest drama king in Nigeria's politics. I think if judges keep seizing passports from our allegedly corrupt politicians, barring them from traveling abroad for the usual medical checkup, we would keep seeing more of metuh or even worse than.

and the Oscar goes to Olisa Metuh for the best performing actor in the movie Squandermania…..

He may have won the Head of House task twice in a row, he may be the strongest male contender in the house but viewers are certain Tobi is under a form of siege.

As the game’s rules state that the housemates have to compete in pairs, Tobi has had CeeC in his company just as all the other housemates, only that Tobi’s relationship with CeeC is baffling.

Viewers believe CeeC and Tobi have now become so inseparable it’s irritating. In fact, some are saying CeeC may have jinxed her partner. LOL!

The Tobi we saw entering the house and the Tobi we are seeing now #BBNaija pic.twitter.com/rE6DV3GTFD

Days after losing his mum, ‘Science student’ rapper, Olamide is getting set for his first tour of Europe and maybe there’s no better time to try on a new look.

It’s not the first time Olamide is switching up his looks and he usually rocks it, mindless of how we all feel about it.

With this new hairdo, Olamide channels American trap artiste, Travis Scott and Nigerians are not having any of it.

Just look at the replies:

We signed out at Tragic Scott!