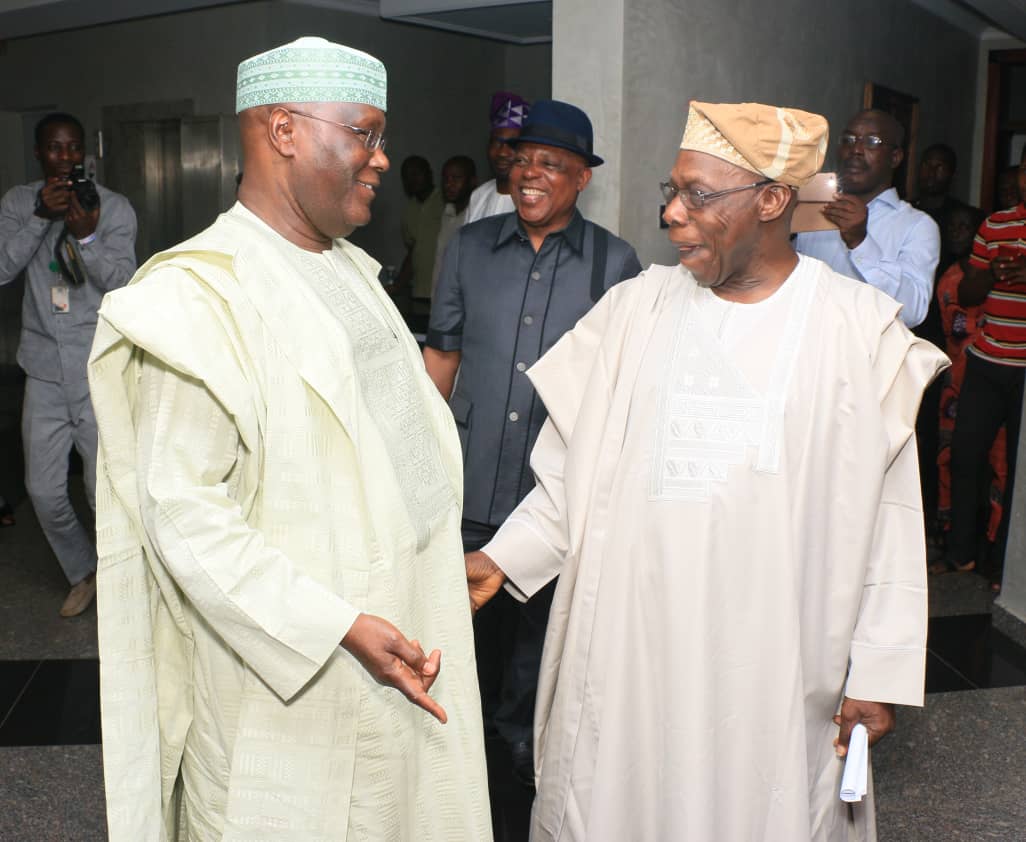 The political drama ahead of the 2019 presidential election took a sudden twist on Thursday when former President Olusegun Obasanjo declared his support for People’s Democratic Party (PDP) presidential candidate, Atiku Abubakar who was Vice President during the Obasanjo administration between 1999 and 2007.

Obasanjo, over the years, had been bitter towards Atiku and had declared at some point that God would never forgive him if he ever backed an Atiku presidential ambition.

Atiku with a team of PDP leaders and influential clerics including, Bishop David Oyedepo of the Living Faith Church Worldwide; Islamic preacher, Dr Ahmad Abubakar Gumi; and Most Reverend Matthew Kukah, Catholic Bishop of Sokoto Diocese, paid a visit to Obasanjo at his home in Abeokuta where he earned the statesman blessings for 2019.

“In the presence of these distinguished leaders of goodwill today, let me say it openly that we have reviewed what went wrong on the side of Atiku. And in all honesty, my former Vice-President has re-discovered and re-positioned himself. As I have repeatedly said, it is not so much what you did against me that was the issue but what you did against the Party, the Government and the country.”

“Whenever or wherever you might have offended me, as a Christian who asks for God’s forgiveness of my sins and inadequacies on daily basis, I forgive and I sincerely advise you to learn from the past and do what is right and it will be well with you. Obviously, you have mended fences with the Party and fully reconciled with the Party. That’s why today, you are the Presidential Candidate of the Party.”

“With Nigerians voting for you, it will mean that you secure their forgiveness and regain their confidence. It will be with the hope or assurance of a Paul on the road to Damascus Conversion. After all, change and conversion are of man. I believe that with a contrite heart, change is possible in everybody’s life and situation.”

“You have better outreach nationally and internationally and that can translate to better management of foreign affairs. You are more accessible and less inflexible and more open to all parts of the country in many ways. As Pastor Bakare, one-time running mate of the incumbent President said, “You are a wazobia man.” And that should help you in confronting the confrontable and shunning nepotism.”

“I make one demand and one demand on you today, I need you to say before God and man that you will always remain irrevocably committed to upholding ALL the provisions of the Constitution of the Federal Republic of Nigeria and the whole country will remain your single indivisible constituency.”

Fast forward to 2020 the headline will be:

So the cycle repeats. https://t.co/raHatb9Nvh

Going by the comments of Obasanjo in Abeokuta today, he still maintains his position that Atiku wronged the country, reason why he said "God will never forgive me if I support Atiku." Supporting Atiku therefore doesn't mean the ex-vp still not what he used to be… 1

If Obasanjo likes, he can endorse Atiku, if he likes he can endorse Buhari, even Oby if he so desires.
Question is very simple, can OBJ deliver his Abeokuta Polling Unit? At this point, the answer is no.

Former President Chief Olusegun Obasanjo says he has forgiven his former vice-president, Atiku Abubakar, wholeheartedly, describing him as “president-to-be.”
He didn't only forgive him, he will be supporting him against Buhari.
APC, online herdsmen and Buharists: pic.twitter.com/dry06RIKX3