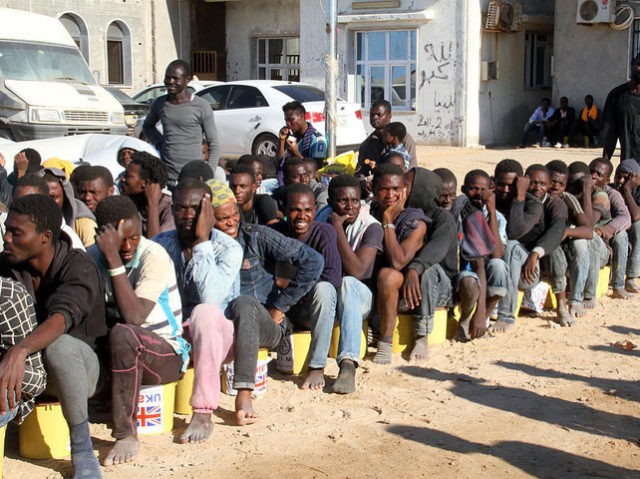 NO to slavery in Libya

An exclusive report published by CNN gained worldwide attention after it revealed that migrants in Libya are being sold by smugglers for as little as $400.

People are outraged by the existence of real-life slave auctions in 2017 and so close to home. Nigerian politicians and celebrities have raised their voice against this cruelty and although belated, President Muhammadu Buhari has also condemned the act.

Upon the release of that report, the National Commission for Refugees, Migrants and Internally Displaced Persons (NCFRMI) has worked in collaboration with the International Organization of Migration (IOM) to ensure the return of Nigerian immigrants to the country.

239 of them arrived the country today and we know this because gospel act, Nikki Laoye shared live videos from the airport.

Thanks to President Donald Trump’s narrative about CNN being a perpetrator of fake news, the Libyan media is seizing the moment to dismiss the US broadcaster’s exclusive slave trade report.

Days after CNN’s report was made public, Trump tweeted, “CNN International is still a major source of (Fake) news, and they represent our Nation to the WORLD very poorly. The outside world does not see the truth from them!”

Now, Libyan media channels are insisting that CNN had an ulterior political motive for publishing that report and in essence, it may be “fake news”.

Libya in your homes!

Former Nigerian rapper, Eldee the Don took to Twitter to share another perspective to this slave trade story. How about those of you who practice slavery in your homes? You’re all just as guilty.

“eLDee‏Verified account @eLDeeTheDon ..While we’re on the topic of slavery in Libya, I hope we also find time to reflect on the slavery & human trafficking in many of our African homes as well. Those”house-helps” from Benin/Togo whose masters get paid 10k every month to do chores from dusk till dawn. #Slavery”
“eLDee‏Verified account @eLDeeTheDon  I’m talking about the ones you kick and scream at all day to do your house chores, watch your kids, do your laundry, dishes, cook etc. The ones you pay less than $50 a month to the man/woman who brought him/her from Benin/Calabar/Akwa Ibom/Togo. Yes, that is also #Slavery.”
“eLDee‏Verified account @eLDeeTheDon Lets not only kick against slavery when it is convenient. If you really want to take a stand, Let go of the unfortunate teenager that is slaving away in your quarters right now. You are not very different from the Libyan who paid for slaves to do his chores. #slavery”
Let those words sink in!
Bubu for Part 2?
If you’ve been arguing with your friends and neighbours on President Muhammadu Buhari’s intentions for the 2019 elections, you may need to calm down and listen.
The president has dropped hints and if we’re wise, then we should be paying attention.
In Cote d’Ivoire where he is attending the 5th European Union-African Union (EU-AU) Summit, Buhari said, “First I want to apologise for keeping you for too long sitting, this is because I insisted on the governors attending this meeting.This is why I came along with them so that when we are going to meet you, when you are going to meet the rest of Nigerians, if you tell them that their governors were in the company of the president, I think that will be another vote for me in the future. I’m very pleased that they were able to turn up“.

So are you willing to give him another shot at presidency?