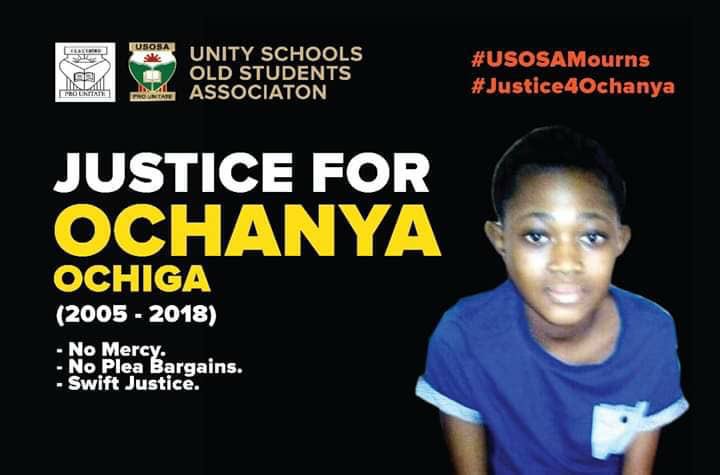 Activists, civil rights organisations and Nigerians across social media are calling for justice for 13-year-old, Ochanya Elizabeth Ogbanje who was consistently raped by a father and his son in Ugbokolo in Benue State.

Ochanya had been raped by the father and son since she was 8-years-old and later died at the Benue State University Teaching Hospital, Makurdi from complications arising from vesicovaginal fistula (VVF) and other health complications.

The accused men have been identified as Andrew Ogboja, Head of Department, Catering and Hotel Management at the Benue State Polytechnic, Ugbokolo, Benue State, and his son, Victor Inalegwu Ogboja, a final year student of Animal Production at the Federal University of Agriculture, Makurdi.

A matured man. You grow erection towards an 8yr old girl. You insert your penis forcefully into her undeveloped privates. Your son then does same.

For years. Till she dies.

You are a BEAST.

Our justice system must ensure u & ur son get no place amongst men.#JusticeForOchanya

She was sexually molested by her 52yr old lecturer uncle and his son from the age of 8 till she died at the age of 13 after complications arising from injuries sustained from the sexual harassment.
NO ONE DESERVES TO GO THROUGH THIS!!

We are lending our voice to demand #JusticeForOchanya whose life was snuffed out prematurely by this 52 year-old man and his son.

She was raped by the men in the picture below from 8 year-old till she died at 13. pic.twitter.com/e11RbdqVbr

We all need to lend our voice to get#JusticeForOchanya. This wicked act must not go unpunished. How do u rape a minor to the point of death and you call yourself a human being. No ur a monster! The People that should protect her are the same people that turned on her! pic.twitter.com/tesU9Ubrtp

We are outraged about the death of Ochanya.

We are outraged by the repeated rape of this minor from age 8,by her Uncle & his son.

The young girl has died from complications of this abuse,& we are demanding justice on these monsters.

Starboy Wizkid employed the most unimaginable method to generate buzz around his new video, Fever and guess what? It worked.

When the video hit the internet early on Wednesday, it easily became the most-talked-about thing on the internet, for obvious reasons. Tiwa Savage, his rumoured girlfriend, was recruited as video vixen and did a great job of selling the “girlfriend” narrative.

As at the time of writing this post, the video has hit 1.7 million views and counting making him the first Nigerian artiste to have two songs hit those sky-high number under 24 hours. He did it first in 2016 with his Drake collaboration, One Dance.

Hate it or not, Wizkid laughs last!

Fever is the first Nigerian Video with no feature to have 1m views in less than 24hours. People will go from the curiosity of watching ROMANCE to enjoying the song they may have never liked. Thats MasterClass 🔥🔥

Wizkid’s Fever video made a million views in 24 hours. You can’t overemphasize how essential ‘strategy’ is in the field of marketing.

Wizkid is a super influencer! Kudos to the fever video director

Meanwhile, this black lady is attempting to convince us that she’s white

“When it comes to black people, I think they’re all ugly,” says a 16-year-old African-American.
Full story: https://t.co/uAUBsu1QAw pic.twitter.com/97TQGWBGdP

We would have said “white people problems” and it would have been accurate, according to her!