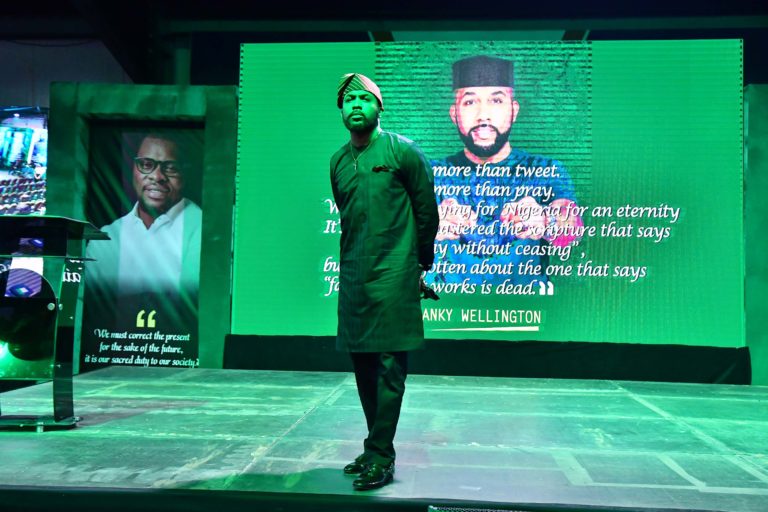 He made the declaration today at the debut convention of the Modern Democratic Party, a political party founded in 2017 by a consortium of youth associations which pushed for the Not Too Young To Vote bill.

Known for his advocacy and passion for voter education, the 37-year-old will run for a seat in the Federal House of representatives, Eti-Osa LGA, Lagos where he says ‘there’s need for renewed hope and results, just like the rest of Nigeria’.

‘‘Our generation needs a realistic rallying point. We need to begin in community, earn our way into the system and up the ladder. We need someone to stick their neck out and pave the way. The problem is that we’ve always looked to our leaders for change… instead, look in the mirror and look around you. We are the ones we’ve been waiting for all along.

I have shared this vision with quite a few people. Some have been incredibly supportive, but some have advised against it. I am under no illusions that this run will be easy. Considering who we are going up against, this is almost impossible. They said we don’t have the money to run… we say our strength lies in our numbers. They said we don’t have the structure, we say we will attempt to build it. They said, “what if you lose”? I say, what if we win? ‘’

“For many years, I’ve been a vocal critic of leadership and bad governance in Nigeria, and a vocal proponent of young people participating in the political process. And yet, the turn out is never good enough, because we simply just don’t care enough to do what it takes. I realized that all my years of Activism in Nigeria, didn’t amount to much more than my plight as an Arsenal fan. You see, as Arsenal fans, we love our club, but we knew it was time for change. We complained, we tweeted, we held up banners at the stadium, we shouted and hashtagged for many years. But until the people who were a part of the system – the board, the shareholders, the executives etc – until THEY decided that it was time for change, all of that noise would not have amounted to anything.”

“Our generation does not really believe in the existing powers that be on both sides of the divide.. and for good reason. We have been taken advantage of and lied to.. we are tired and disenfranchised. We are frustrated and suspicious. We don’t believe in our current political options, so it’s time for us to build our own. We want a seat at the table of Governance in Nigeria, but we must bring our own chair. Because if we are to get into leadership, it MUST be on our own terms and conditions, with our own vision and set of ideals… otherwise we risk being marginalized and handcuffed by the same systems we are criticizing.”

“We want to fix Nigeria, but we must begin by rebuilding our communities. Everybody seems so obsessed with the Presidential race – it’s one of the most frequent suggestions I get – “Banky W, run for President”. But see, like I said earlier, I do believe in dreaming big, but I believe in starting small, and working your way up. Hope is what we needed in ’93. 25 years later, hope is what we’ll need in 2019.  And it is with the greatest sense of humility, purpose and destiny, that I announce my candidacy for the 2019 Federal House of Representatives, in the Eti Osa constituency of Lagos State.”

“I have spent the majority of my life in Eti-Osa. It is where I went to Primary school and part of Secondary School. It is where I have built my home and my business; it is where I plan to spend the rest of my life, with my wife and the children I pray God blesses us with. Most of the friends I have, most of the businesses I admire, and even most of the businesses that inspire our entire country are based here. The economy of Eti Osa is central to the Nigerian Economy, with a GDP contribution that dwarfs several states combined. And yet in spite of all this, it’s no longer a secret that much like Nigeria at large, the people in our neighborhoods are yearning for better representation, across local, state, and federal levels. Eti-Osa is infact, a microcosm of Nigeria as a whole. It is home to people from various backgrounds… it is home to the Market women in Ajah, the billionaires in Banana Island, the creatives living in Lekki, and the multicultural ethnicities in Obalende. We have people from various tribes and tongues, people from all walks of life.. extreme wealth, and extreme poverty. There are things that we should be proud of, and there are plenty areas for improvement.”

“They said we don’t have the money to run.. we say we our strength lies in our numbers. They said we don’t have the structure, we say we will attempt to build it. They said “what if you lose”? I say, what if we win? You see, my entire life has been a story of just dreaming dreams, praying about those dreams, setting goals, and working until they come true. I can live with trying and failing. I can not live with not trying. So while we may not have a godfather, we do have God. And we have vision. And intellectual capacity. And integrity. And the right intentions. And last but not least, a whole lot of hope.“