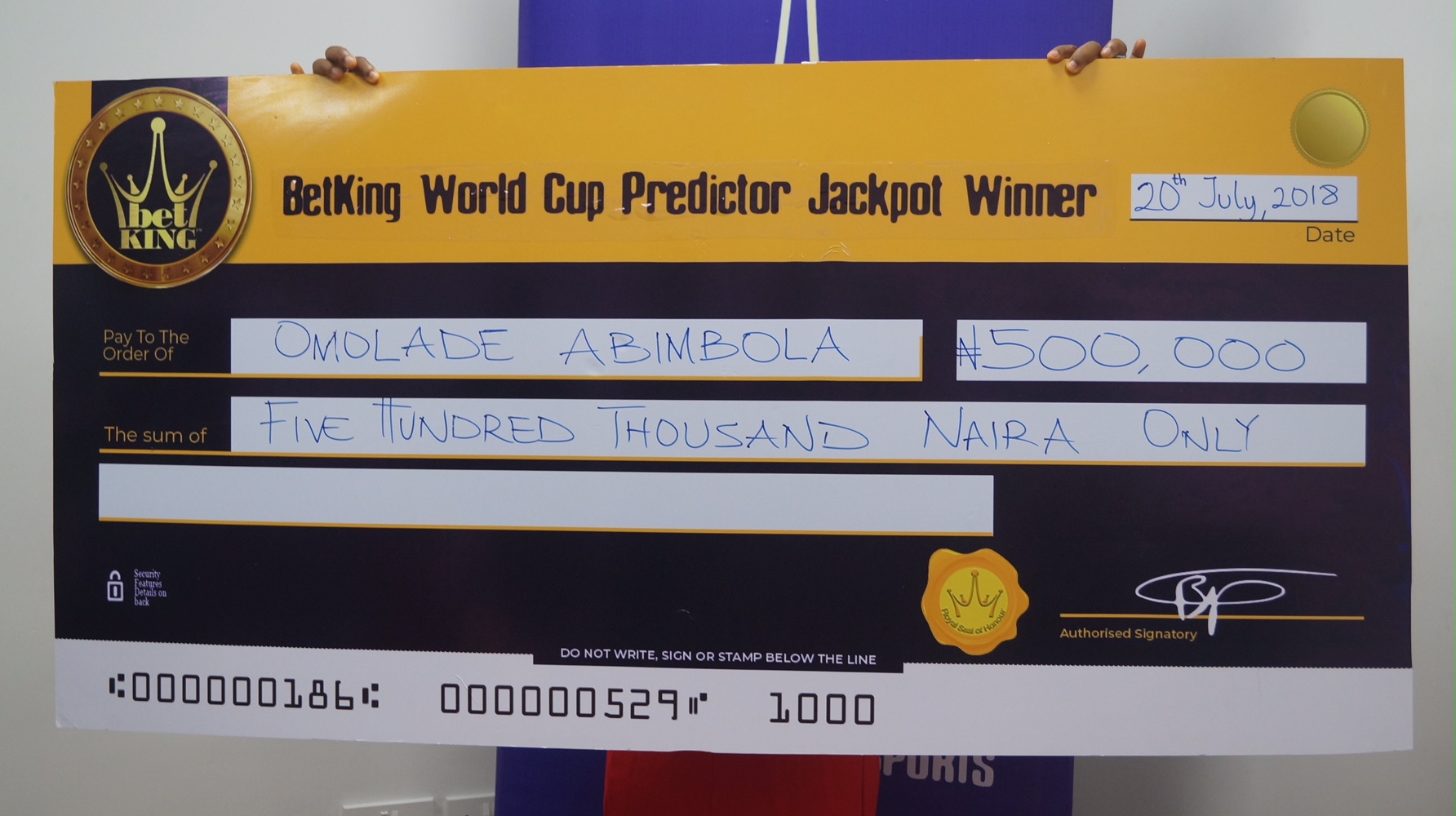 Sports betting platform, BetKing has presented a cheque of five hundred thousand naira to a middle-aged woman, Omolade Abimbola who emerged winner of the World Cup Predictor Jackpot. The winner was selected randomly by an electronic draw on July 16, 2018.

Omolade Abimbola expressed gratitude to BetKing as she received her cheque at an official presentation at the BetKing office in Lagos.

Abimbola narrated how a passion for football led her to sports betting and though her friends found it strange, she had maintained a strong belief that BetKing was where she would win more. She also revealed she was in church when she received the news about her winning from a BetKing representative.

“At that point, I knew God had answered my prayer.” She added gleefully, as she spoke to journalists. Abimbola believes the winning would help her invest in some business ideas, and stated her desire to keep staking on the Playground for Kings.

In her closing words, she advised punters to register on the BetKing platform to join several other winners like her, as the Premier League season draws near.

BetKing’s Head of Marketing and Customer Experience, Ruby Chuku announced that the Playground for Kings empowers everyone, irrespective of gender. She said, “The Playground for Kings is not designed for men only. If you are an adult man or woman who loves sports and is excited about predictions then BetKing is designed for you. We look forward to welcoming other punters out there who want to join the league of winners at BetKing.”

BetKing is a sports betting company that launched on February 22, 2018, in Lagos, offering online services Nationwide and agency services in several states within Nigeria. With headquarters in Lagos state, BetKing is working towards a nationwide expansion that places several physical shops across all states in Nigeria. Among the offerings of the company’s services are sports betting, not restricted to football, hockey, cricket, tennis, basketball and more, customized state-of-the-art virtual games including the exclusively designed sports Kings’ League.

To join the playground for kings, users can visit www.betking.com to sign up. Users who prefer physical shops can simply walk into any agent shop across Lagos, Anambra, Oyo, Imo, Akwa-Ibom ,Osun and other operating states. You can also follow BetKing on Instagram, Twitter, and Facebook with the handle @BetKingNG.