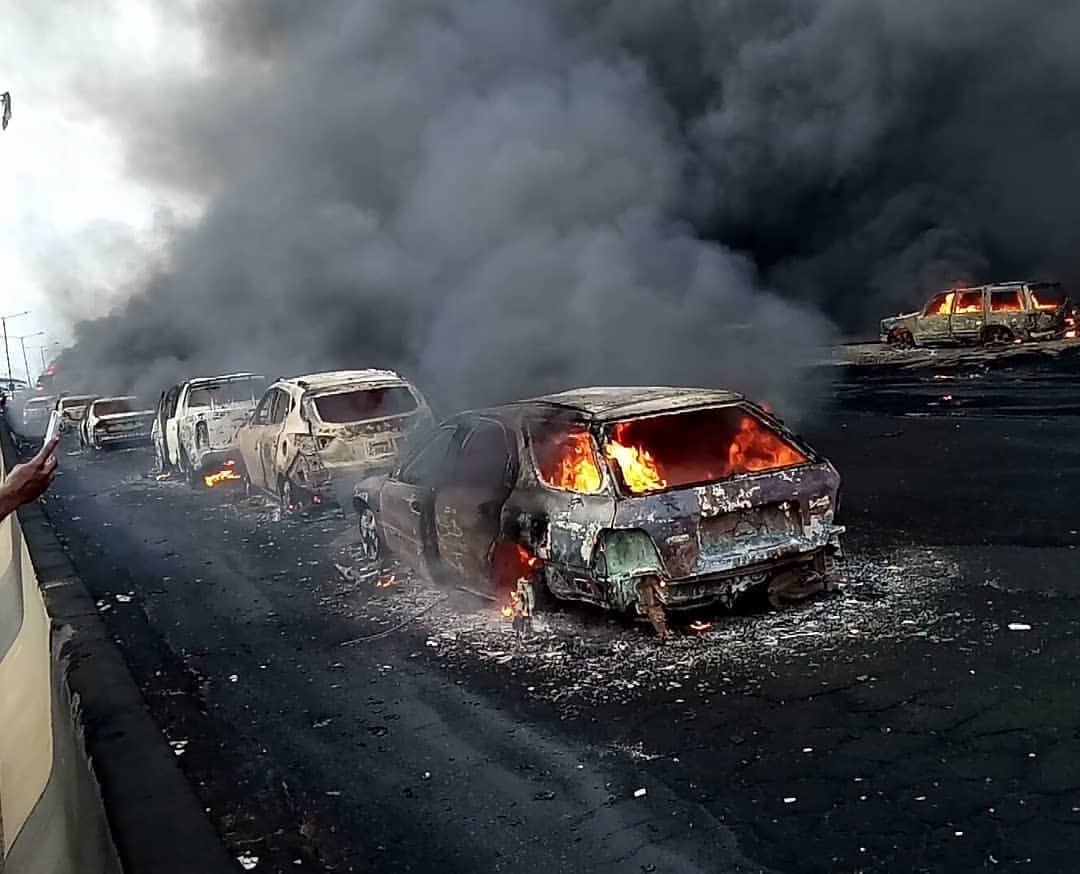 Days after the Otedola Bridge fire tragedy that claimed nine lives, the Lagos state government has expressed a followup reaction stating that the owner and driver of the ill-fated truck that exploded will face prosecution.

The state Commissioner for Police, Edgal Imohimi made this known earlier on Monday when he told newsmen that investigations into the cause of the explosion are “in top gear”.

Imohimi added, “I have just received a letter from the office of the Attorney general and commissioner for justice which stated very clearly charges which we are going to prefer against the driver and the owner of that tanker”.

According to eye witness accounts on the day of the tragic incident, the tanker experienced a brake failure that caused it to start spilling its content and later exploding. 54 vehicles were burnt in the mishap.

A fuel tanker ban in Lagos has also been announced

Following the legal action set to be taken against the tanker driver and owner, Lagos state is now taking other measures to prevent similar tragedies in the future.

Commissioner for Transportation, Ladi Lawanson has ordered that fuel-laden tankers are only to ply the designated trailer route which is Apapa-Oworonshoki Expressway via Ogudu to Lagos-Ibadan Expressway.

Also, tankers and heavy-duty trucks have now been ordered to obtain their Ministry of Transportation (MOT) Certificate of Road Worthiness and must present their vehicles for the Vehicle Inspection Office (VIO) test.

We have two questions: Who knew a designated trailer route existed in Lagos? Also, how long will the government’s bravado last before things return to the mess that they have always been?

In recent months and following the incessant killings of innocent Nigerians in the North, religious leaders have felt the need to join the conversation to hold the government accountable for its inactions, especially as it concerns security.

In that light, Pastor Paul Adefarasin of House on the Rock church divulged some information and a bit of history of the Fulani tribe and their intentions to colonise Nigeria. Once the video hit the internet, it became the cause of controversy as a number of social media users contradicted his opinion while others simply appreciated his stance.

So, I couldn’t watch this video yesterday but this morning, I have seen it like 5 times now & I’m yet to come to terms with the outrage that followed. Honestly, I’m seated here, trying so hard to understand what triggered the anger I read here yesterday & it is amusing to me. https://t.co/XFcOmp7jhW

I hear sons of perdition are mobilizing an attack on Pastor Paul Adefarasin for speaking his mind after parishioners in the church’s Jos branch were killed in droves. How inhumane can these urchins maintained by crumbs get despite the failure of this admin? 🤔

I dare you to arrest @pauladefarasin for saying the truth, the whole truth and nothing but the truth. Paul, history will be kind to you. Very kind! https://t.co/3z2jCjSaGY

Nothing saddens me like seeing someone I respect disappoint me so greatly.

.@pauladefarasin has joined the hordes of Shameless Pastors criminalizing the Fulani people on the wrongs of a few bad eggs. Why do we keep pushing this Islamization agenda? Why?

I am proud of the Pentecostals.They are standing up to the evil in the land like never before,even at risk to their lives and liberty.Bishop Oyedepo,Bishop El Buba,Apostle Suleman,Pastor Enenche, Pastor Ibiyeomi,Pastor Paul Adefarasin, Prophet TB Joshua and Pastor SarahOmakwu.👌

He was part of the executive member of Pentecostal Fellowship of Nigeria.

This crisis is real and you people should listen to him.