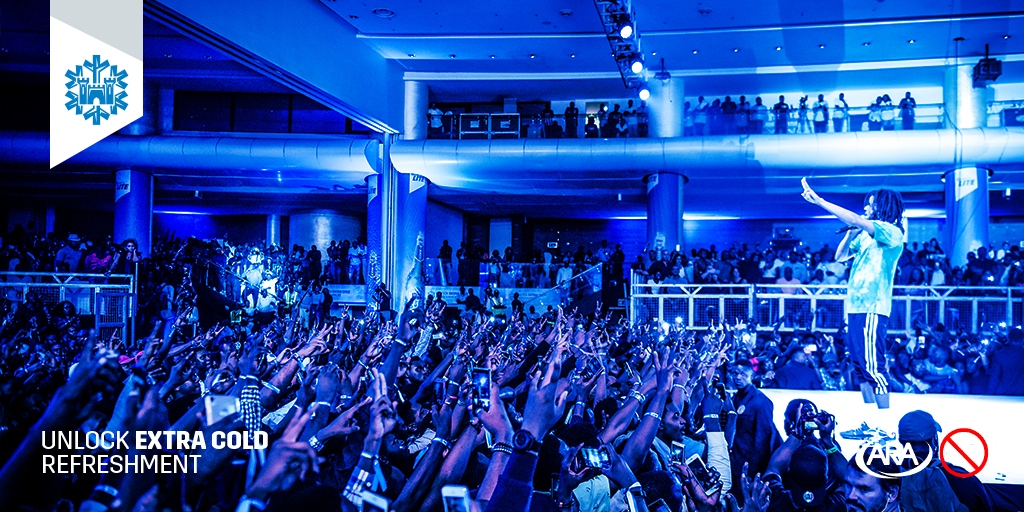 Castle Lite unlocked different shades of lit on Friday, April 271th, 2018 at the Eko Hotel and Suites with its much talked about musical concert.

The Castle Lite Unlocks concert was headlined by multi-platinum selling American rapper, J Cole and a host of Nigerian international stars led by Davido, Wizkid, Tiwa Savage, and there who thrilled the audience with so much energy on an extra cold stage.

The theme of the night, Ice Cold, was replicated in the décor and aesthetics of the stage and entire hall giving the feeling of being in a gigantic freezer. Then the digital stage began the count-down. There was an explosion of colourful lights, beautiful sounds with electrifying melody coming out from the massive speakers hanging from the ceiling in strategic places around the hall.
The crowd was warmed up by thrilling performances from MI, YCEE, Falz Davido, Wizkid and Tiwa Savage as they rapped and sang along.

And the moment came…

J Cole captivated the hearts of the audience by performing songs off his latest album, KOD, which was released on the 20th of April, 2018, for the very first time ever anywhere. And to the surprise of J Cole and many, the audience knew the lyrics of the songs and sang along to every song on the album.

“Castle Lite breaks boundaries and music is a natural fit with the brand’s DNA. We also appreciate the fact that it represents the biggest passion point for our consumers lives, hence we are always committed to unlocking memorable fan experiences and creating shared value for all our consumers with concerts like this”, Franscoe Bouwer, Castle Lite Marketing Manager, said.

The excitement in the air was palpable as fans rushed towards the stage dancing to the tunes. In keeping with standards the brand is known for, the entire hall was transformed into a stage worthy of any world-class act.