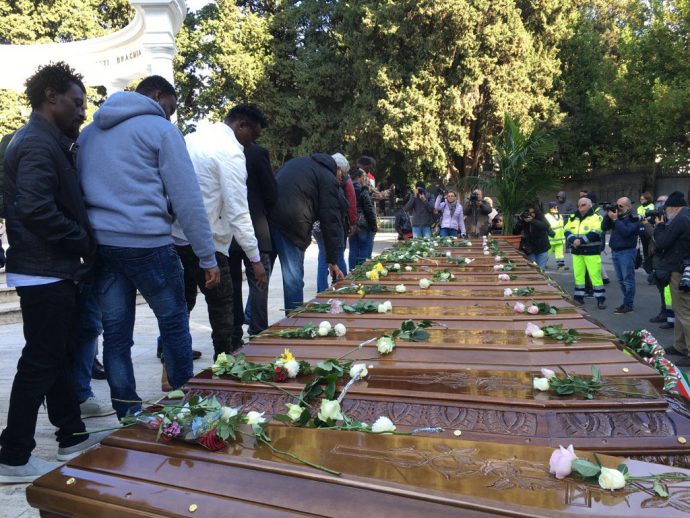 Zimbabwean president, Robert Mugabe was seen for the first time in public since the military takeover that shook his dictatorial government earlier this week.

Mugabe attended the graduation ceremony of Zimbabwe Open University in Harare this morning in his first public outing since he was held under house arrest.

And guess what! He wasn’t falling asleep…

It was a sad day on TwitterNG as photos emerged from the state burial held in Italy for the 26 Nigerian women and girls who drowned while crossing the Mediterranean sea to Europe last week.

Bring Back Our Girls activist, Oby Ezekwesili tweeted, “Our 26 daughters are being buried in Italy today. Oh that this would be the LAST TIME we’d lose Daughters of Nigeria in such shamefully tragic manner on the Mediterranean Sea!”

While the girls are being honoured in death in Italy, their government over here has not batted an eyelid.

No, nothing ridiculous has happened in Lagos. That headline is the title of rapper, Olamide’s 7th album which dropped today.

The album which was put together in less than 48 hours is getting rave reviews on the internet already and we’re excited for it too.

Raise your hands if you’re like us. We don’t have to actually listen to any new project from Olamide before we fall in love in it. Can’t blame us, the man earned it.

Is GEJ the new king of clapbacks?

Asiwaju Bola Ahmed Tinubu must have thought he had bars when he said at a book presentation yesterday that former President Goodluck Jonathan’s administration won a gold medal in corruption.

First, Nigerians or better still, GEJites could not let the man off for having the audacity to refer to anyone as corrupt when he holds a major stake in Nigeria’s corruption story.

Second, GEJ would not let the accusation slide easily so he responded taking a cue from Asiwaju’s analogy about money running away faster than Usain Bolt during his administration.

“Corruption under Buhari is faster than Usain Bolt”. Agree or nah?

This Twitter user is upset about Bovi’s homophobic jokes

What do you think?