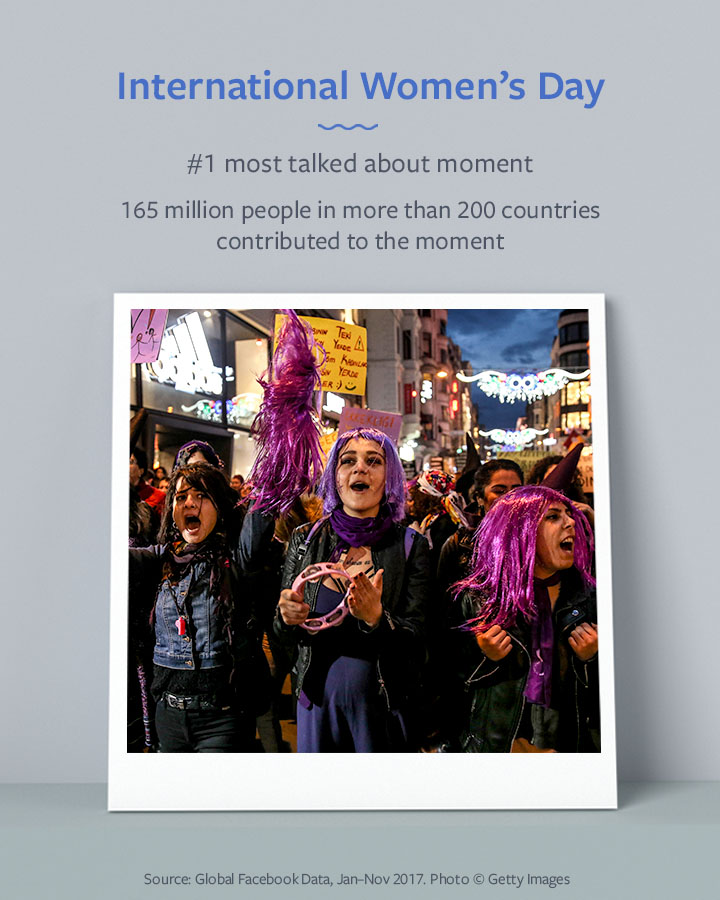 First, people came together to react and talk about important moments and events that happened around the world. These top three moments that people discussed globally in 2017 were:

International Women’s Day: This was the No. 1 most talked about moment in 2017, doubling from last year, with people around the world talking, sharing and posting in celebration of women and related issues.

Super Bowl 51: Fans around the world turned to News Feed to cheer for their favourite teams, celebrate with Lady Gaga and debate the top TV ads, with more than 262 million views of Super Bowl-related videos on the platform.

Las Vegas Violence: This tragic incident drove conversation around the world, which in turn motivated more than 3,300 people to offer help to their community through our Crisis Response tools on Facebook.

Second, people came together to support one another in times of crisis. 2017 was a difficult year with natural disasters and violence around the world, but it was inspiring to see people help each other when they needed it most. The top three moments where people came to each other’s aid on Facebook were:

Earthquake in Mexico: The response to this crisis in late September drove the highest number of total interactions within Crisis Response on Facebook of the year, with millions of people marking themselves safe, offering help to their communities or donating to the cause.

Hurricane Harvey: In late August, the community rallied to help those in need by raising more than $20 million in the biggest fundraising effort for a single crisis in 2017 on Facebook.

One Love Manchester: The most viewed video and live broadcast on Facebook in 2017, this benefit concert generated over 80 million views and raised more than $450,000 for those affected by the Manchester terror attack.

Finally, people used Facebook to get together in person. The top two ways people connected through these offline moments by creating Events on Facebook were:

Total Solar Eclipse: This celestial moment in August brought the world together through more than 20,000 Facebook Events in more than 80 countries.

Your Year In Review

Facebook also wants to create a Year In Review for you. Starting Wednesday, you may see a personalized video in your News Feed. This video includes moments from this past year that you’ve shared or been tagged in, and compiles them in a short video that can be edited and shared. You can access your video by visiting facebook.com/yearinreview.

The top moments of this year’s Year In Review were determined by gathering a list of the top keywords by volume mentioned in a single day on Facebook between January 1st and November 1st, 2017. To identify which topics were unique to 2017, Facebook compared these keywords to the previous year’s maximum single-day volume.

This means that keywords such as Mother’s Day and Halloween, which typically represent the top moments every year, do not repeatedly appear at the top of the list.