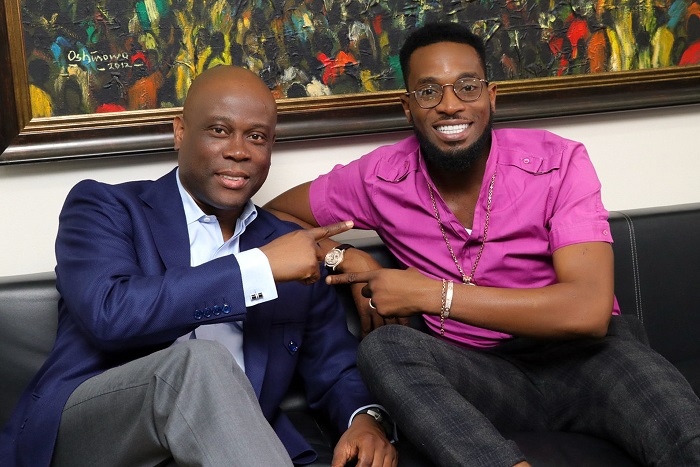 Access Bank CEO, Herbert Wigwe on Friday had a sit down with renowned entertainer, D’Banj to take questions from friends and fans on every and anything. The no-holds barred-engagement which was broadcast via the bank’s Instagram live feed had D’Banj moderating and taking the questions off the social media platform.

It was an exciting interview session between the two kings where they spoke about everything from the future of Access Bank to D’banj’s marriage, Mo’Hits, the music industry and lots more.

Here are 7 things we learned from the exchange between them:

1. On the journey so far for Access Bank CEO, Herbert Wigwe

Herbert ran D’Banj through his life’s journey saying he always knew he wanted to “do something interesting, something different”, hence his fascination with accounting, and by extension, banking.

Speaking on his success, he explained it with the mantra: “If you do it well, you’ll do well in life”. He believes Access Bank is still in its early stages, having spread across Africa, Europe, and Asia. Sooner than people know, “Access Bank will be the world’s most respected African Bank, and everybody will see it”.

2. I am happy when my team is happy

When asked by D’banj: “With so much success, what makes you happy?”, Herbert said his joy is hinged on the success of his employees, mentees, and family. He said: “My greatest joy is seeing my guys (team) do well.”

“What makes me work hard, gives me joy is my children and my family”.

Herbert believes that with his knack for ensuring his team succeeds, Access Bank is headed for the top and will be a global institution.

Herbert says he starts every day with a prayer and no matter when he sleeps, he first wakes up by 5am, eventually starting his day an hour later. The 51-year-old also said he goes to the bank’s gym “4 times a week” to keep fit.

4. Access Bank is the best bank for young people

Herbert, who left as an Executive Director in another bank after spending 10 years, drew similarities with D’Banj’s story leaving Mo’Hits. He pointed out that leaving wasn’t due to any disagreement, but a need for the creation of an oasis.

6. Thanks to Herbert, Access Bank will Sponsor the #MoHitsReunion

Herbert told D’Banj that he was missed at the #MavinConcert which was sponsored by Access Bank in 2015. He went ahead to give his commitment that he will be on board “1,000%” to support the Mo’Hits reunion concert.

7. I do not actively support any football team apart from the Super Eagles.

Herbert says there was a time when he used to support football teams until he realized he was too emotional to participate actively in that endeavor, recalling one time when Arsenal (the team he supported at the time) lost to Manchester United and he realized how heartbroken he was from it – not being able to function properly the next day, so he decided that won’t be something he’d be doing consistently. Being a patriot, the only team he supports is the Super Eagles.