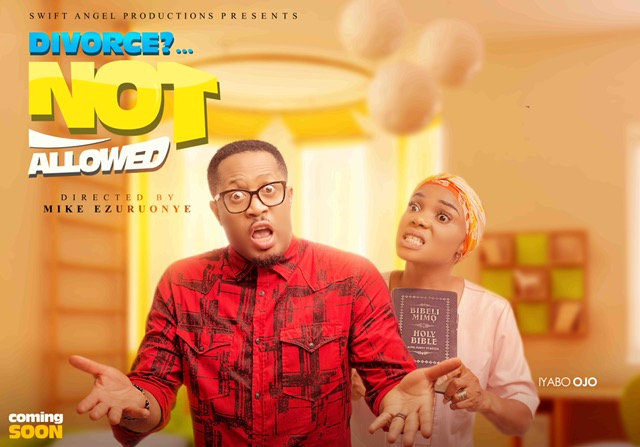 When two ladies decided to go to the cinema with their boyfriends to see the movie of the moment – ‘Divorce Not Allowed’ – they didn’t have any idea what was coming. But as the movie unfolded, they were in for a big surprise; one that would change their lives forever.

The romantic comedy, which has been getting a lot of positive reviews since it debuted in cinemas across Nigeria on Friday, April 13 went a notch further when a man who watched with his long-term girlfriend at Silverbird Cinemas, Uyo went on his knees to propose.

His proposal was met with fanfare and the lady did not hesitate to give a yes to the surprise proposal.

“After watching the movie, I knew it was the perfect time to ask her to be my wife”, the young man revealed as he answered questions from others present at the scene.

The director of Divorce Not Allowed, Mike Ezuruonye was present at the scene and expressed pleasant surprise as he took pictures with the excited couple.

In the same vein, an unidentified person sent a video of another proposal that happened in a different cinema after watching the movie.

Mike Ezuruonye expressed happiness at these developments as he shared the video on his Instagram page. In his words, “I present to you TWO MARRIAGE PROPOSAL videos at the CINEMAS…The first was sent to me by a Fan and the second, I witnessed personally yesterday after the Movie “DIVORCE NOT ALLOWED” was shown at UYO CINEMAS. I was so touched. One of the guys said the movie is not only Entertaining but Spiritual…Wow..I’m Humbled🙏🙏… GOD BLESS these Couples.”

The movie continues to show in cinemas across different cities in Nigeria. Mike Ezuruonye himself, who embarked on a National tour has already been to Lagos, Benin, Port-Harcourt, and Uyo.