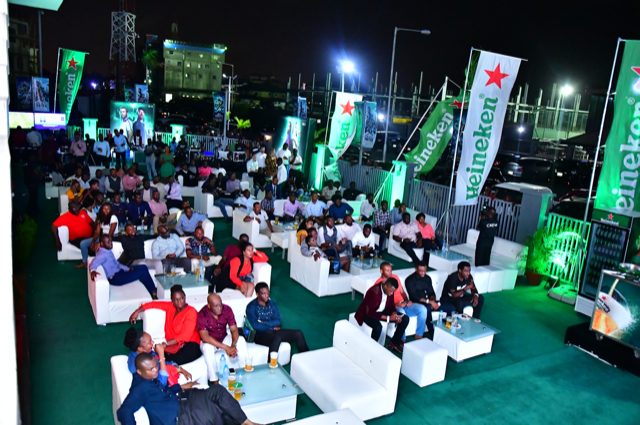 It was Valentine unusual for football fans in Nigeria as they were treated to an exclusive viewing of UEFA Champions League matches by International Premium Lager Beer, Heineken at the IMAX Cinemas, Lekki, Lagos.  The event commenced with various fun games which entertained the eager fans ahead of the live matches, Real Madrid Vs PSG and FC Porto Vs Liverpool.

Over 200 excited fans gathered at the cinema venue as they cheered their favourite clubs to victory and shared dramatic moments during the matches with friends present and at home.

Real Madrid fans were agitated when PSG scored the opening goal but thanks to Cristiano Ronaldo’s equalizer, which came via a penalty just before half-time, a measure of calmness filled the atmosphere. The Portuguese striker scored a second goal in the 83rd minute, which was shortly followed up by a third one from Marcelo to take the game beyond the Parisians.

During the halftime break, guests calmed their nerves further by testing their knowledge of football with the “I know the Game” quiz. Winners were rewarded with Heineken branded items and the evening came to a banter-filled close as PSG and Porto fans counted their losses.

UEFA Champions League fans in Lagos, Abuja and Port-Harcourt can continue to look forward to enjoying the Heineken UCL experience at IMAX Lekki, Silverbird Abuja and FilmHouse Port Harcourt, as the brand will be hosting fans every week across these three cities, with a series of live matches planned for the rest of the 2017/2018 Champions League season.