Sign in
Home FEATURED “Governor Ayo Fayose is the showman’s showman”; Kylie Jenner may become the... 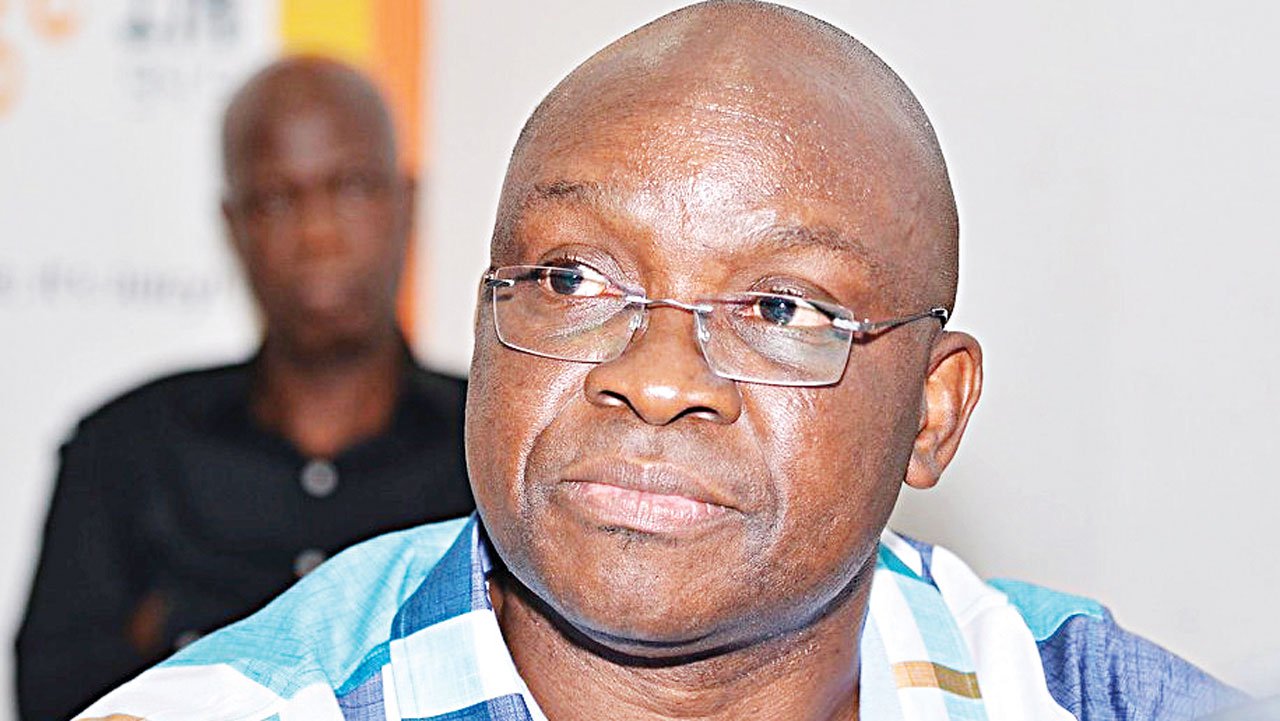 …it was so bad, he ended up in a neck collar.

Ekiti state governor, Ayodele Fayose has accused members of the Nigerian Police deployed to his state for the forthcoming gubernatorial election, of mistreating him.

Governor Fayose recounted the fate he suffered at the hands of the police who stormed the People’s Democratic Party (PDP) rally that held in a pavilion in the Fajuyi area of the state.

“My people, the Lord will fight this battle. The COMPOL MOPOL of Nigeria Police and the AIG ordered that the governor should be killed. I was slapped by a policeman and shot at,…”

Commenting on the situation, the PDP revealed that the police acted on the instruction of President Muhammadu Buhari.

Earlier in the day, photos of the governor sitting on the ground and looking worn out after he was allegedly teargassed filled the internet. Few hours later, he was seen in a neck collar. Maybe Nollywood isn’t really lying when they shoot your stomach and blood comes out of your ear. Your MCM governor is wearing braces after being allegedly “teargassed”

Fayose said Police fired teargass at the crowd of the PDP, unfortunately, only Fayose was hit. Lol.

Gunshot and tear gas incidence was reported at Ekiti Government house, Governor Fayose was said to have collapsed and people are tagging Donald Trump. To come and do what exactly??? As if he doesn’t have bigger problems to deal with.

Ayo Fayose is the showman’s showman. The Terry G of governors.

This man is just looking for the best excuse to go abroad for treatment, just so he can disappear. Don’t be surprised if you see him in a wheelchair by this evening. Dino did it; Methu did it; now Fayose is doing it! https://t.co/0U90vt7QmY

…and not only is she on the cover of this edition of the magazine, she is also the youngest to make it to the list!

The youngest of the Kardashian-Jenner clan famous for the reality show, Keeping Up with The Kardashians, Kylie Jenner has made her Forbes debut as one of America’s 60 richest self-made women.

According to the magazine, Kylie Jenner, who makes a living from making and selling lipsticks, is worth $900 million and another of hardwork and income multiplication will make her the youngest ever self-made billionaire.

Her sister, Kim Kardashian who rose to fame after a leaked sex tape and has maintained her celebrity status by selling beauty products and being married to rapper, Kanye West is worth only $350 million.

The magazine wrote, “What her half-sister Kim Kardashian West did for booty, Jenner has done for full lips. Like Kardashian West, she has leveraged her assets to gain both fame and money. But while her sister is best-known for the former, Jenner has proved adept at the latter. In historic fashion.”

Jenner had her first child with rapper boyfriend, Travis Scott in February.

Keeping Up With The Kardashians was worth it afterall!

Award-winning rapper, Cardi B and her fiancee, Offset (one-quarter of rap group, Migos) have welcomed their first daughter.

The baby, Kulture Kiari Cephus, arrived on Tuesday in a hospital in Atlanta.

The ‘Bodak Yellow’ rapper first announced her pregnancy during a performance on SNL in April. This came weeks after speculations about the pregnancy had filtered through the internet.

Three questions: Who are these women? Where are they headed and why? What exactly is happening in this picture?