Sign in
Home FEATURED Gay sex is no longer a criminal offense in India; “Isn’t Naomi... 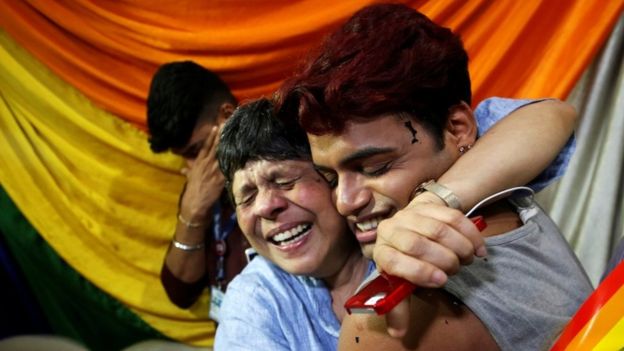 Gay sex is no longer a criminal offense in India

The Supreme Court in India has overturned a 2013 ban on gay sex in the country.

A colonial-era law in India categorises gay sex as an unnatural offense that is punishable by up to 10 years in prison.

Thursday’s ruling sparked celebrations across the country as it signals a major victory for the LGBT community in India and other parts of Asia.

A valid question to ask considering supermodel, Naomi Campbell attended the GQ Men of the Year Award on Wednesday night with Wizkid as her date.

The duo were photographed holding hands as they walked into the event that held at the Tate Modern, London.

Naomi Campbell wore a patterned corset dress by Versace while Wizkid showed up in a first-of-its-kind look, a tuxedo stylishly paired with Nike AirMax sneakers.

Nigerians on social media would never have let this go without hilarious opinions. Here are the best:

Isn’t Naomi Campbell supposed to be like a Mother Figure to Wizkid? 🙄🙄🙄 pic.twitter.com/tFgsSmTZpl

Nigerians shaaaaa, everyone is now concluding that wizkid is knacking Naomi campbell 😂 😂 😂

What if Naomi campbell is Wizkid’s God mother 😂 😂 😂 pic.twitter.com/INDMIJe4ei

when he said “pretty, pretty lady age is just a number” he meant it 😂
💔💔

How Beyonce is celebrating her 37th birthday

Pop icon, Beyonce recently clocked 37 and she is celebrating what she describes as a monumental year in Italy.

Nothing left to say, just pictures to blow your mind (hopefully).