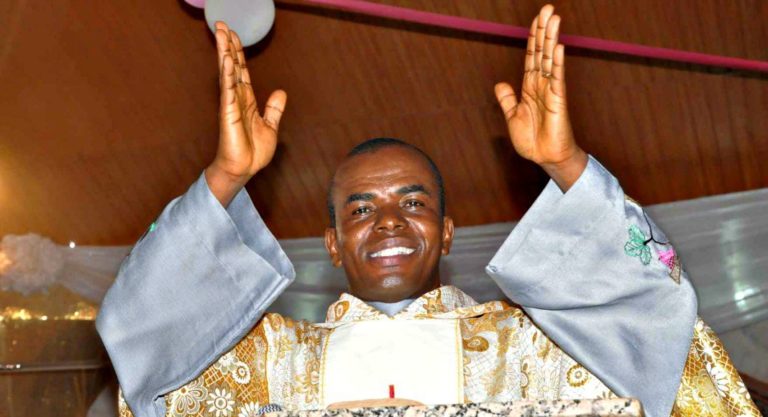 Reverend Father Ejike Mbaka of the Adoration Ministry, Enugu, has declared that PDP presidential candidate, Atiku Abubakar and his running mate, Peter Obi will fail in the race to Aso Rock.

Father Mbaka made this declaration at a gathering where he requested that Obi makes a financial donation to his ministry but the latter refused.

Viral video of Father Mbaka saying Atiku and Peter Obi would fail as Obi refused to declare how much he’ll support Mbaka’s ministry with. pic.twitter.com/E42o0fiRLK

Nigerians have taken to social media to express their disappointment at the famed man of God for his appalling behaviour, while heaping praises on Obi for his refusal to bend to Mbaka’s demands.

What Father Mbaka did to Peter Obi at the alter of God and in God’s name was disgraceful and should be condemned by all well meaning Christians. If this was what Christ stood for, I don’t want to be a part of it anymore.

Calling peter obi stingy, he is heading for shame because he didn’t make Public donation in your church bazaar….

I really hope that video of Father Mbaka is fake (Doctored)

I just watched a video of Father Mbaka making subtle threats, throwing jabs at, and embarrassing Peter Obi because he (Obi) seemed hesitant about making a public donation at Father Mbaka’s church’s bazaar.

All I can say is, it was shameful, pathetic and painful to watch.

Now I see why Peter Obi is nicknamed Okwute Igbo

He stood strong in what he believed in amidst insults from Father Mbaka, he was as solid as a rock on that stage

This is the vice president we need, not one that dances to any tune that is played#LetsGetNigeriaWorkingAgain

This is Father Mbaka Campaigning And Endorsing Governor Ganduje Of Kano State who is facing serious corruption charges in Kano State for taking bribe in dollars.

This Father Mbaka is not just a FAKE Reverend Father but a THIEF !!

APC IS A PART FOR CRIMINALS AND THIEVES pic.twitter.com/s2aOK3l0ju

Fr Mbaka disgraces @PeterObi for refusing to donate to his church. That is exactly why you should vote for @atiku and Peter Obi. They wont donate public money to churches and mosques. Has @officialEFCC ever looked for Peter Obi? These are the types of leaders we need! #RenosDarts

Nigerian singer, Small Doctor has been arrested by the Lagos State Police Command for unlawful possession of firearms and for allegedly threatening to shoot a police officer.

The Penalty singer was arrested along with a group of men in Oshodi, who threatened to shoot a police officer if he did not get out of their way.

According to the Lagos State Commissioner of Police, Edgal Imohimi, “It was alleged that some unknown men, four of them, in an unregistered green SUV had brought out a gun and threatened a policeman that if he does not leave the road, they will shoot him.”

Small Doctor was paraded and interrogated by the police who claimed he alongside his group of friends were in “possession of a functional rifle, cartridge and some of their personal belongings.”

Meanwhile, another man of God, Bishop Oyedepo may have missed the joke

Following the heat generated by a conspiracy theory that President Muhammadu Buhari is dead and a doppelganger, Jubril from Sudan is currently being paraded by the government, General Overseer of Living Faith Church, Bishop David Oyedepo has made some additions to the commentary.

And of course, he gets Nigerians riled up:

Why didn’t Bishop Oyedepo confirm from “God” to know if the President is Buhari or Jubrin from Sudan? Doesn’t he roll out prophecies every other year?

Imagine if a Muslim Leader, like Sultan were to throw tantrums to a Christian President like Bishop Oyedepo has been throwing to @MBuhari ?

I know the Bishop has always detested PMB (its a free world, really, the right to dislike anyone is guaranteed constitutionally atink), but I don’t understand why he keeps going this far to peddle/amplify (from the pulpit) falsehood and disinformation about him. Really puzzling.