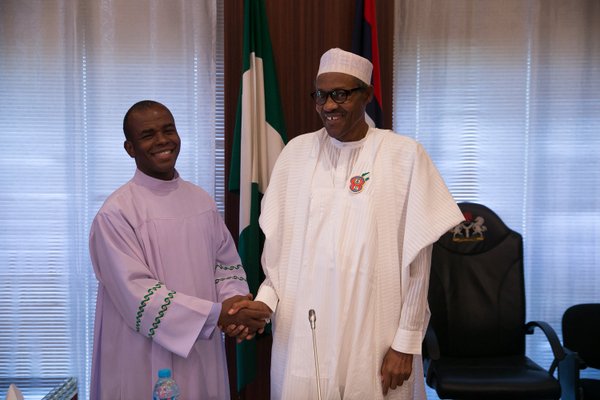 Controversial cleric and leader of the Adoration Ministry, Enugu, Father Ejike Mbaka on Monday paid President Muhammadu Buhari a visit at the Presidential Villa in Abuja.

The outcome of the meeting has not been made public but it should be noted that Father Mbaka had predicted a Buhari victory in the 2015 elections.

Nigerians on Twitter have reacted to Father Mbaka’s visit to the president, especially considering the timing. See some of the comments:

Between Sanwo-olu and a concerned Lagosian

Gubernatorial candidate of the All Progressive Congress(APC) in Lagos, Babajide Sanwoolu was at an interactive session where he took questions from residents of the state on his plans if he emerges governor.

The Question and Answer session was seamless until this lady stepped forward to question the governor on housing. Her approach to the questioning is one for the books. Watch:

NBA reacts to the suspension of CJN Onnoghen

By boycotting the courts…

The Nigerian Bar Association (NBA) has called on its members across the country to boycott the courts for two days, starting Tuesday, following the suspension of the Chief Justice of Nigeria, Walter Onnoghen.

President Muhammadu Buhari sacked the CJN on Friday over allegations of false declaration of assets and swore in acting CJN, Ibrahim Mohammed Tanko.