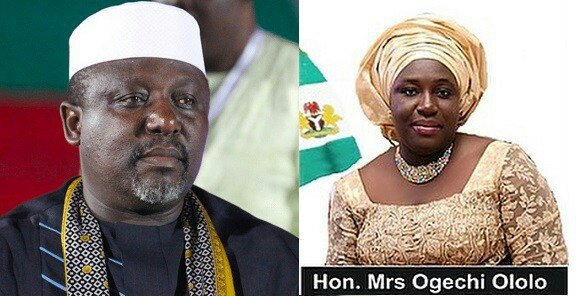 Can we all calm down? Imo state governor, Rochas Okorocha did not intend to name a Commissioner for Happiness and Couples’ Fulfilment. It was a typographical error.

What he actually named his sister, Ogechi Ololo was Commissioner for Happiness and Purpose Fulfilment. Sounds a bit more rational, doesn’t it?

Okorocha explains that, “The word “Couple” was inadvertently written, instead of the word “Purpose,” we regret that…”.

Well, here’s what the people of Imo regret. Voting you in as governor, Mr Okorocha!

A wildfire is currently raging through Los Angeles and the sight is super scary.

The wind-whipped wildfires are burning across dry terrains in the north and west of Los Angeles.

Motorists who plied the highways close to the location of the inferno shared videos on social media and all we can do is pray.

Not the typical morning commute… pic.twitter.com/kJIOQeqsIK

Can we just make agbada our national flag?

Our traditional agbadas are fast becoming national monuments and if nothing else makes us proud of being called Nigerians especially in these days of police brutality and abuse of office, we’ll just take solace in our dear agbada.

Today, the Queen of England hosted the High Commissioner from Nigeria, His Excellency Mr George Adesola Oguntade in her Buckingham Palace and the man showed up dressed to kill.

Apart from the accidental colour coordination with the Queen’s outfit, Mr Oguntade shone through and through with his wife in their burgundy aso oke.

Today at Buckingham Palace, The Queen received and held an audience with the High Commissioner from the Federal Republic of Nigeria, His Excellency Mr George Adesola Oguntade. pic.twitter.com/pOdPV3nSTU

Nigerians are not bowing out just yet.

The Nigerian Police Force is unrelenting in its insensitivity and people are making sure they don’t get away with it , at least not this time.

The frontliner of the #EndSARS campaign, Jega Awosanya Segun who tweets as @segalink was accused by the Police PRO of being sponsored by politicians and is being investigated by the police.

Nigerians are now rallying around him to ensure the police don’t lay their callous hands on him or hurt him.

It's rather unfortunate that Police spokesperson said politicians are sponsoring #EndSARS campaign.
This is not politics.
The horrors you read are just a tip of the iceberg of what innocent Nigerians suffer in the hands of #SARS .

I stand with @segalink

#PMBinKano but Nigerians are far from impressed

President Muhammadu Buhari was in Kano earlier today but rather than be excited, Nigerians on Twitter had this to say: