Sign in
Home FEATURED Dino Melaye “no longer comfortable sitting among lions and tigers”, moves to... 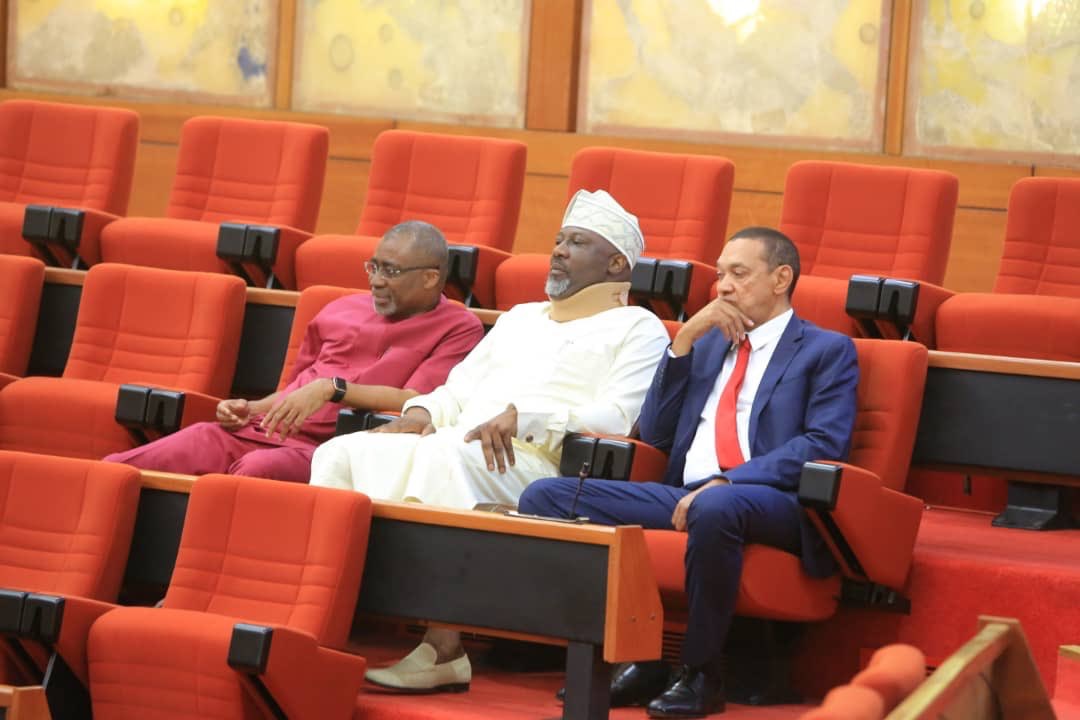 Following his absence from the Senate after a forceful attempt to escape the Nigerian police, Senator Dino Melaye today returned to plenary.

His resumption was characterised by the usual theatrics that included the adornment of his outfit with a neck collar, a walking stick, few attempts to stagger and the most surprising, a ’decampment’ to the opposition party, PDP.

He suggested the move when he made a request of the Senate President, Bukola Saraki stating, “I have a special request to you Mr President. Because of the trauma I went through and I’m still going through, I want to seek your indulgence that you will call on the Sergeant-at-arms to look for a comfortable seat for me on this side of the divide (the opposition side) because I am no longer comfortable sitting here. So, I want to ask the Senate President that you mandate the sergeant-at-arms tomorrow to look for a seat for me on this other divide of the chamber.”

The embattled senator was received with open arms by PDP senators including Ben Murray-Bruce who tweeted to that effect:

Great to have @dino_melaye at the @NGRSenate today and hearty welcome to our great party, @OfficialPDPNig. We will treat you good – no trauma or intimidation whatsoever.

Never thought Dino Melaye was an APC member to be honest. Only right to go back home.

Dino Melaye did not defect to PDP, all the media outlets that reported that he defected are irresponsible and unprofessional, Y'all should stop taking them serious.

Does that include us?

Well, the Senator had something to say earlier:

He clearly will not be found in the company of “snakes, lions and tigers” anymore. What else does it mean to decamp?

The former governor of Taraba and reverend, Jolly Nyame has been found guilty of 27 of the 41 charges brought against him by the Economic and Financial Crimes Commission (EFCC).

He was today sentenced to 14 years in prison by Justice Adebukola Banjoko of the Federal High Court, Abuja for diverting N1.64 billion amounting to a criminal breach of trust.

#Alert Jolly Nyame, ex-Taraba governor has been sentenced to 14yrs for criminal breach of trust, 7yrs for gratification, 5yrs for obtaining by dishonesty and 2yrs for criminal misappropriation to run concurrently. Justice Banjoko ruled out an option of fine.

Jolly Nyame, a man of God, and APC member, got 14 years (without an option of fine)for graft. What this tells us is that even clergymen can steal, and being an APC member will not shield you from jail under this government.

Nothing to celebrate about Jolly Nyame’s corruption imprisonment, after all the Appeal or Supreme Court may eventually set him free. This is Nigeria.

Jolly Nyame sentenced to 14 years in jail by Justice Adebukola Banjoko. If only he had decamped to APC like Orji Kalu…e for be like Babachir Lawal.

Watch out for many more of such sudden convictions. Olisa Metuh is next. Dem go use PDP people shine..

It doesn’t get better than this in Nollywood movies

Beauty vlogger, Ronke Raji shared this video via Twitter and it aptly describes what Nollywood movies are made of. Just pay attention to the dialogue and the sound effects.