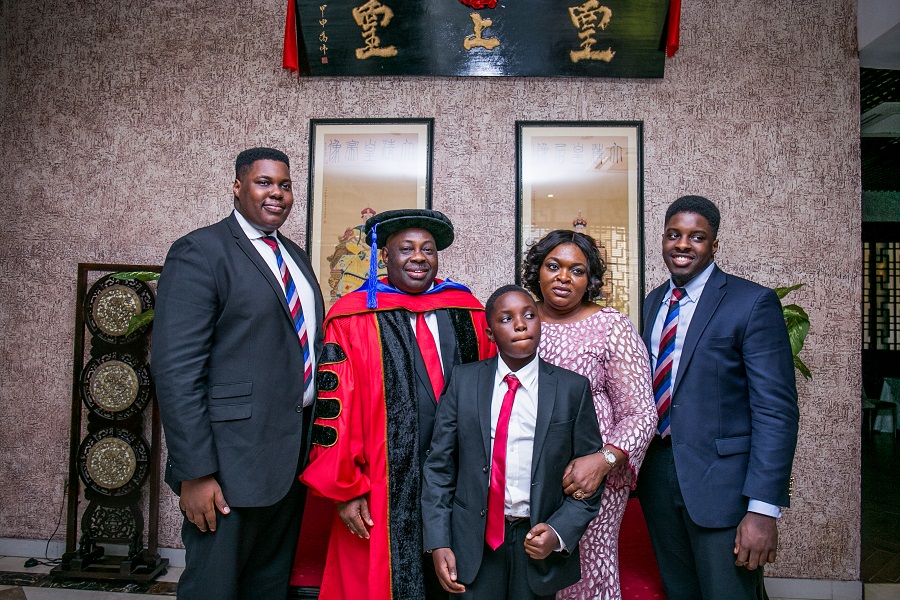 The event, which was graced by His Excellency, President John Dramani Mahama of Ghana, took place at the university’s campus in Accra. The award of Momodu’s Honorary Doctorate degree also marked the commemoration of the institution’s 8th Congregation Ceremony.

The university management said it selected Momodu in recognition of his outstanding contributions to the world of business, politics, literature and the media industry as well as his dogged commitment towards projecting the best of Africa to the world.

Delivering a speech after he was decorated by the University’s Pro-Chancellor, HRM Drolor Bosso Adamtey I, Momodu who was the sole honoree for the year 2016 and the first non-Ghanaian, thanked the University’s Vice-Chancellor, Prof. Joshua Alabi and the Governing Council of UPSA for singling him out for such a great honour. He recalled with nostalgia, his first contact with Ghana exactly twenty-one years ago when he fled Nigeria under the brutal dictatorship of the late General Sani Abacha for exile in the United Kingdom.

“I succeeded in crossing through a smugglers’ route into Cotonou, Benin Republic. I was too scared to stay too long in Cotonou and so decided to meander my way to Lome, Togo. Since I couldn’t speak any smattering of French, my best and ultimate destination was Ghana. I crossed the border at Aflao and waltzed my way to Accra that evening… I departed Ghana on the night of July 28, 1995, and landed at London Gatwick on July 29. Ghana remained permanently etched in my mind. I dreamt of a day I would be able to return to the tranquility of Accra.”

In his speech at the event, President of Ghana, His Excellency, John Dramani Mahama cited three reasons why he decided to attend the 8th Congregation Ceremony of UPSA, one of which he said was to honour Momodu whom he described as a great journalist and a respected African personality. “My third reason for being here this morning is to honour a great journalist and a respected African personality in the person of Chief Dele Momodu. I do this for his outstanding contribution to both national and international discourse, his strong personality, his vision, his perseverance and his strength in the face of adversity.”