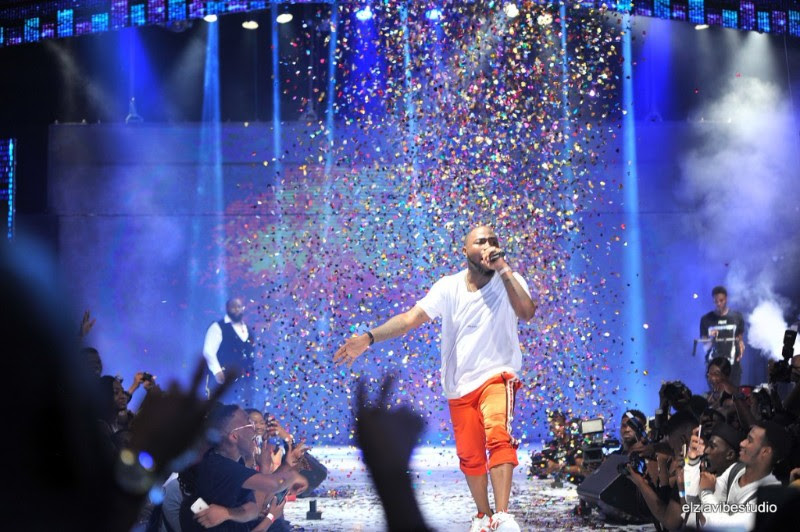 Davido’s ’30 Billion Concert’ was effortlessly the most talked about 2017 concert in Africa and even beyond (thanks to the Twitter hashtag). The concert which attracted attendance and performance from the most celebrated names in Africa such as Wizkid, Don Jazzy, Nasty C, D’banj, Wande Coal, Falz etc., left many enthralled days after it held; and it’s no surprise that excitement found its way into the new year.

Organised by TE Group, Achievas Entertainment and Pentagon, the 30 Billion Concert garnered its prominence as 2017’s biggest concert majorly from the first ever reunion from Mo’ Hits Stars, – a performance that saw the once label mates perform their smash hit records such as ‘Booty Call’, ‘Closer’, Pere, among others.

Falz thrilled fans with his energetic performance of his hit single ‘Bahd Baddo Baddest’ featuring the man of the hour himself; OBO and both artists went on to perform the song together.

Olamide also added to the fiery ambiance of the night, performing one of 2017’s biggest smash hits ‘Wo’, accompanied by Davido.

South African wordsmith, Nasty C delivered an awe-inspiring moment when he graced the stage alongside Runtown; performing their club banger ‘Said’ plus other commendable performances that were met with uncontrolled cheering from fans.

Paying homage to veteran artistes, Davido was wise to include a legendary performance from reggae-dancehall pioneer Daddy Showkey, inducing the good old 90’s nostalgic sensations with songs like ‘Diana’ and ‘Welcome’.

Davido went on to invite his newly declared best friend Wizkid on stage, causing yet another uncontrolled frenzy as both stars embraced; sharing an adorable bromance moment. Wizkid went on to perform his street smash hit ‘Manya’ with Davido; creating what would be regarded as one of the rarest musical moments of the year 2017.

Another segment of the concert witnessed a rare performance from Akpako master; Terry G as he took fans down memory lane with his 2009 single ‘Free Madness’ – spurring a sing-along session from the euphoric audience.

The concert brought about the convergence of some of Nigeria’s most respected talents; spanning across an eclectic list of performers which include Olamide, Nonso Amadi, Teniola, Niniola, Tjan, Patoranking, Ice Prince, Dice Ailes, Reminisce, Humble Smith, Wale Turner, Reekado Banks, Mayorkun, Dremo, Sexy Steel, and a host of others.