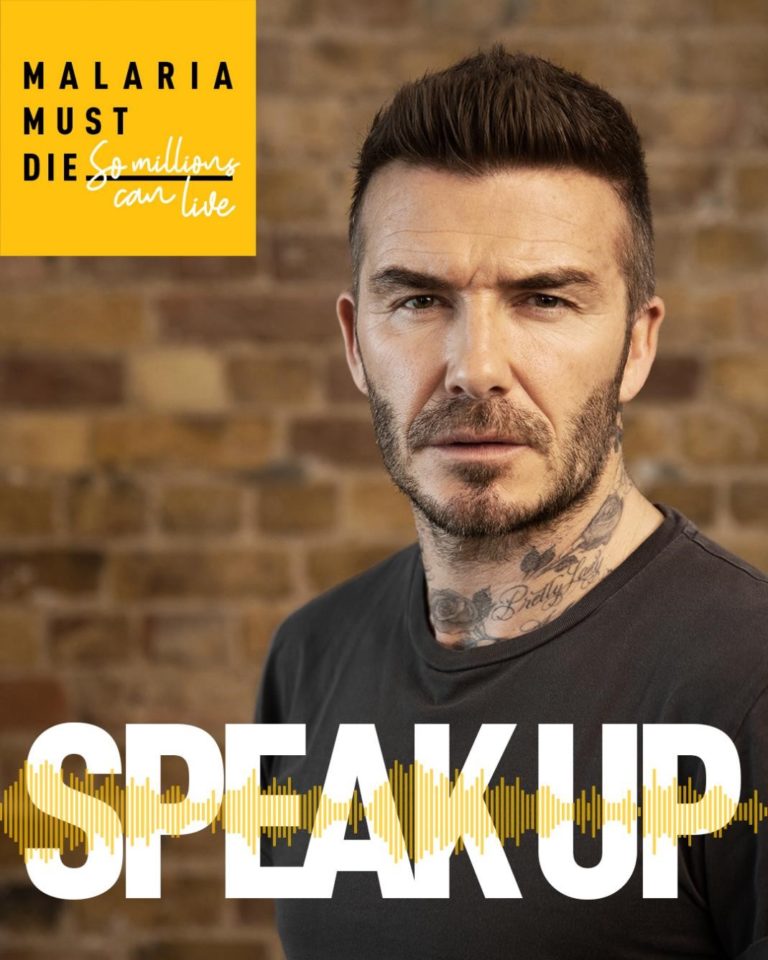 Former captain of the English national football team,
David has joined Malaria No More, a United Kingdom-based organisation to launch the world’s first voice petition to end malaria with the campaign Malaria Must Die, So Millions Can Live.

In a short film using emerging AI video synthesis technology, the
petition reveals David Beckham speaking nine languages – calling on
people to join the campaign and demand action by visiting
malariamustdie.com [1]. The petition aims to get the attention of world
leaders ahead of critical funding decisions for the Global Fund, to
tackle malaria in six months’ time.

The film opens with Beckham speaking in English, but changes as he
begins to speak fluently in Spanish, Kinyarwanda, Arabic, French, Hindi,
Mandarin, Kiswahili and Yoruba – each language representing a part of
the world affected by malaria.

Dr. Elvis Eze, whose voice features in the film speaking Yoruba said,
“My life changed when I worked at a hospital in Lagos, Nigeria and I
saw the intolerable toll of malaria. It doesn’t have to be this way. I
now work for the NHS in the UK and have seen how this is a global
challenge. Through the Voice Petition, we each have a chance to inspire
change wherever we are”.

The ‘Malaria Must Die’ campaign is designed to amplify the voices of
those affected by malaria and gives everyone the opportunity to speak
out. Each voice collected via the petition will contribute to a unique
piece of audio art known as a sound sculpture, grabbing the attention of
leaders in a unique and memorable way.

Speaking in a statement, David Beckham said: “I have been working with
Malaria No More UK for over 10 years and to be a part of this campaign
and to help share some of the real stories behind malaria is really
important to me. Dr. Elvis Eze who was with us on set has suffered with
malaria many times and as a doctor, he has seen how dangerous this
disease can be. For me, it was so important to learn how he is using his
experiences to raise awareness of malaria with young people in the UK
and abroad. It’s unacceptable that malaria still kills a child every
two minutes so please add your voice to the petition.”

David Beckham is a founding member of Malaria No More UK Leadership
Council and a committed champion in the fight against malaria with over
a decade of support for Malaria No More UK. In his long-term role as a
UNICEF Goodwill Ambassador he has seen the impact of malaria on
people’s lives in countries such as Sierra Leone.

History shows that ending malaria is achievable with the right resources
and action. Since 2000, a combination of powerful new tools, increased
investment and strengthened international political commitment including
from the UK, has cut malaria deaths globally by more than 60%, saving
almost 7 million lives, mainly young children.