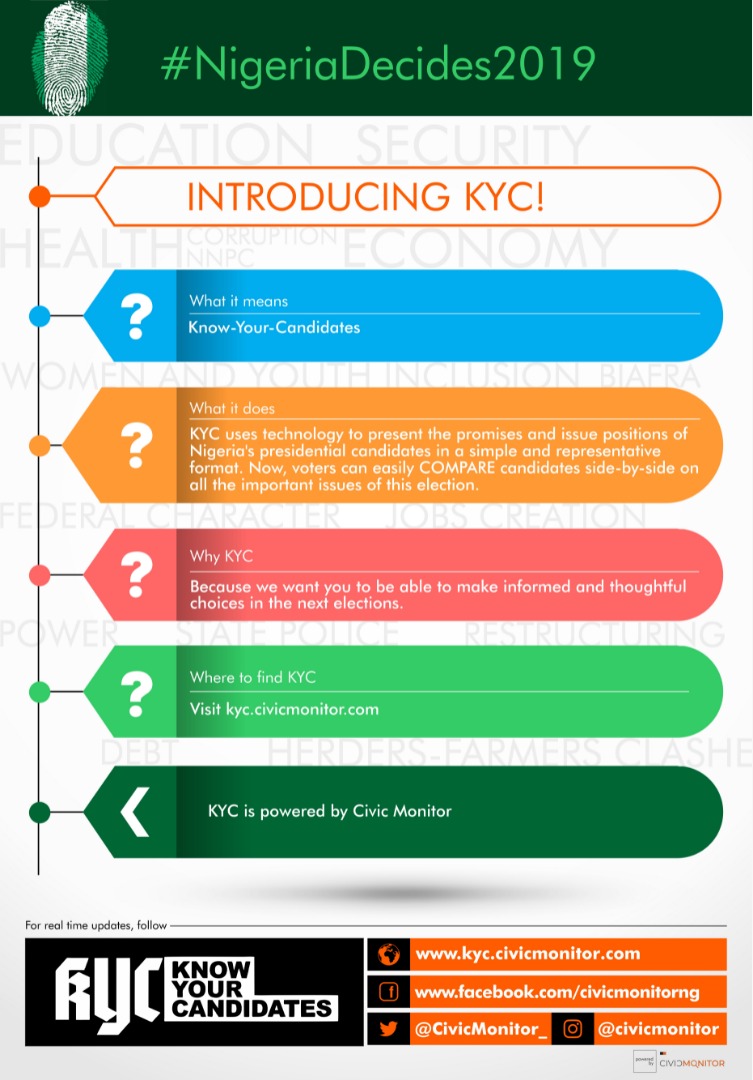 Civic Monitor, a civil society driving a new wave of engagement in the democratic process, on Monday unveiled its Know-Your-Candidates (KYC) tool – www.kyc.civicmonitor.com – for Nigerian voters. With just over a month to the elections, KYC presents the profile, promises and issue positions of the presidential candidates in a simple format and enables voters to compare the candidates on the most important issues.


Founder and Executive Director of Civic Monitor, Stanley Azuakola said “The election in February is perhaps the most important one for the country since 1999. Nigerian voters cannot afford to go to the polls blindfolded,”

He added, “With KYC, we are putting the spotlight on the issues, not insults or conspiracies. It is about voters comparing the candidates on different issues and deciding who has the best plan for them, their families and the nation.”

According to a survey conducted by Civic Monitor in November 2018, Nigerians are keen on knowing the positions of candidates on these key issues: security, power, education, healthcare, corruption, job creation, debt profile, and the economy. Others are herders-farmers clashes, restructuring, federal character, state police, job creation, NNPC reforms and inclusion of women and youths.

“What KYC has done is to collate the positions and promises of 24 presidential candidates on each of these issues in their own words without spin. The data we have compiled with KYC is the most extensive and representative you will find of the candidates anywhere,” Azuakola said.

KYC also functions as a powerful resource for journalists, researchers, fact-checkers, and activists, as it aids their efforts to hold political leaders accountable. Featured media partners include YNaija, Premium Times, The Cable, NigeriaPresslog, Sahara Reporters, Silverbird Television, and The Guardian.

KYC is now live at www.kyc.civicmonitor.com.