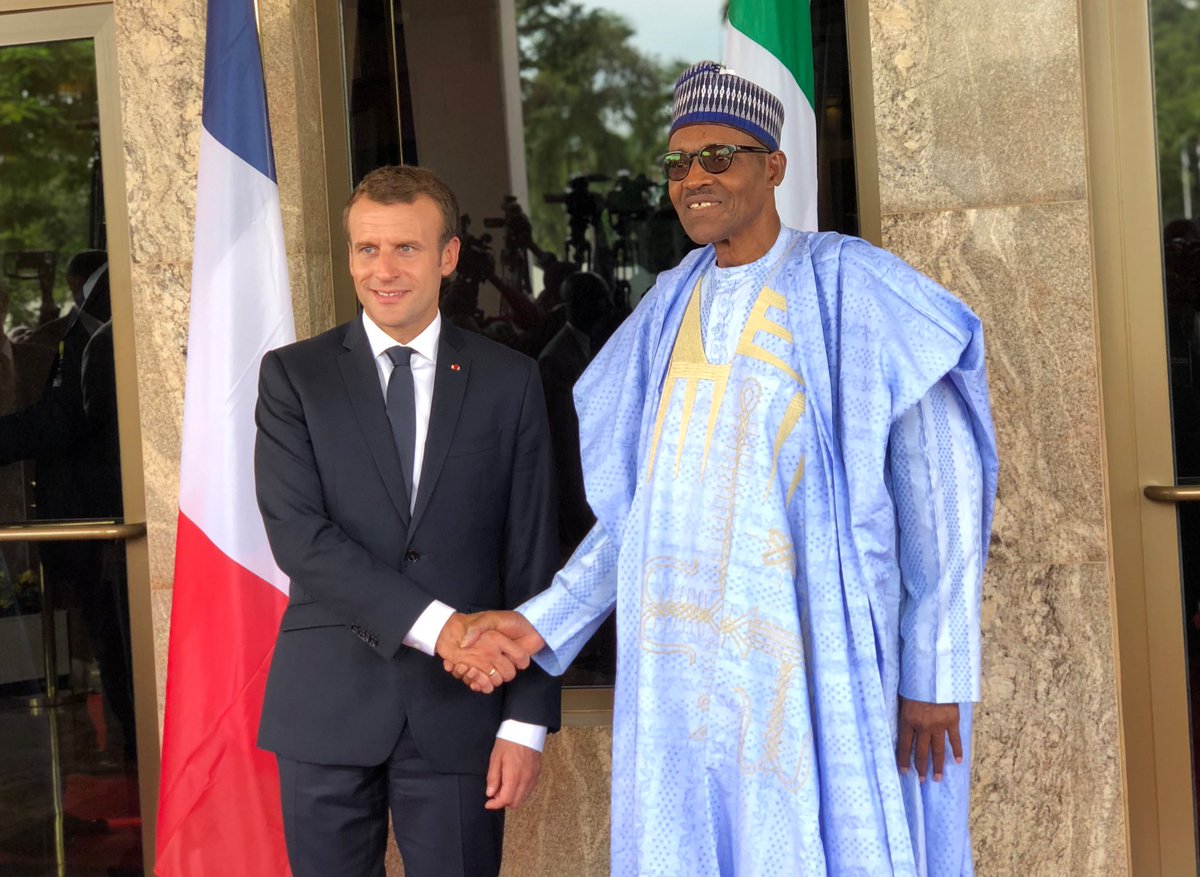 French president, Emmanuel Macron is visiting Nigeria to attend the Celebration of African Culture event at the New Afrika Shrine.

Macron however made a first stop at the Presidential Villa, Abuja where he held a closed door meeting with President Muhammadu Buhari this evening. The duo discussed on security and terrorism as it affects both countries.

This Twitter user has something to say about Macron showing up at the shrine:

President of France (a country better than Nigeria) visits The New African Shrine because he knows the value of heritage.@MBuhari Wouldn’t do same because he is daft #MacronAtNewAfricaShrine

Dear @EmmanuelMacron , I just want you to know that the road that leads new Africa shrine was just graded just because you coming. Don’t let them lie to you. We live in a country where fake character is the real #MacronAtNewAfricaShrine

Nigerians are upset about everything but you can’t blame us, can you?

Four hours before the game that saw the end to Nigeria’s journey at the 2018 World Cup, Super Eagles captain, John Mikel Obi received news that would have torn him apart but he held strong.

Mikel Obi was called by kidnappers who announced to him that they had his father in custody. The older Obi had been picked up along the Makurdi-Enugu expressway as he traveled to a funeral on June 26. The kidnappers demanded a N10 million ransom and more.

The Super Eagles skipper had to keep quiet about the incident or risk losing his dad; so he went on to play in the match and made no mention of it neither to authorities or his team mates. Pa Obi was later rescued on Tuesday by the Nigerian Police after a gun battle with the abductors. It was only after this rescue mission was confirmed succesful that Mikel Obi went public about it.

Obi said, “I had to shut it out of my head and go and represent my country first… And I did not want to discuss it with the coach because I did not want my issue to become a distratcion to the coach or the rest of the team on the day of such an important game…”

2018: John Obi Mikel plays for Nigeria against Argentina despite getting news that his Father had been kidnapped 4 hours before the match.

Not all heroes wear capes. pic.twitter.com/KRH9RxoshL

Mikel Obi’s dad was reportedly kidnapped before Nigeria’s match vs Argentina, and the player was called 4 hours before kickoff by kidnappers who requested about 10 million Naira.

Mikel still played that match…with a cast on his hand. Enough said.

2018: Mikel leads the team against Argentina despite father’s abduction.

WE STAN A LEGEND! pic.twitter.com/ug2EG1Uug3

A day before the Argentina match – which had the hopes of 180m people riding on it – Nigeria’s captain Mikel Obi’s Dad was kidnapped, they threatened to kill him if he told anyone. CAN YOU IMAGINE? https://t.co/4f6ejWpooT

We don’t respect this guy enough. He was called four hours before #NGA faced #ARG to be told about his father’s abduction. Still played out his heart in that #WorldCup game.

Nigeria owes an apology to @mikel_john_obi. No idea how anyone can play football going through this. https://t.co/TfniW9kolx