Sign in
Home FEATURED Apple, not banana: Now that CNN has chosen to tell its story 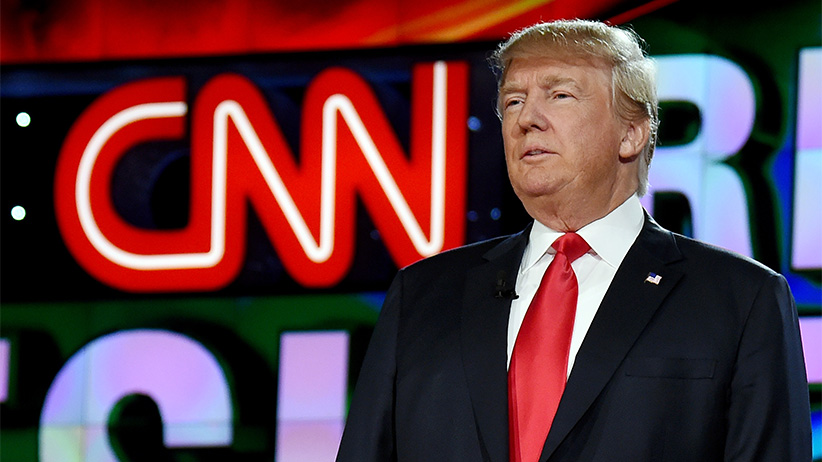 With the rollercoaster ride of the 2016 elections in the United States of America – where Donald Trump defeated the Democratic Party candidate Hillary Clinton – came the rise of the media phenomenon called Fake News. The Republican Party candidate – convinced that the media in the United States and across the world were against his candidacy – decided to wage a war of his own by setting out to discredit their media stories against him.

By doing that Trump conjured up the image of a political crusader – a maverick with the sole mission of changing the establishment and ridding America of an archaic system that no longer works for the benefit of the ordinary citizen.

While many thought that his war against everyone not named Donald Trump will end with the defeat of Clinton at the polls last November, the President has continued to fight his imaginary enemies chief of which is the media. International news outlets such as The New York Times, The Washington Post, Politico, Buzzfeed, The UK Guardian, Cable News Network (CNN) have been hit by a gale of accusations of being less than objective in their reportage of news as it relates to Trump’s policies and activities as president, and the dirt appears to be sticking.

A survey conducted last May by the Pew Research Centre indicates that more and more Americans are losing their trust in the integrity of the media with many of them investing only a moderate trust in the industry (even less are the people who trust the information they get on social media). According to the survey, Americans’ attitude about the media is deeply divided along partisan lines.

It is therefore refreshing to see CNN – the 24-hour news behemoth – making an attempt to tell its own story amidst the beating it has received from no less a personality than the President of the United States. Never in the history of the relationship between politics and media have we seen such a deliberate assault on an industry that is saddled with the responsibility of holding government accountable on behalf of citizens.

CNN decided to fight back its traducers in October by undertaking a Facts First ad campaign lest the fake news tag stick. In the 31-second video running on the network, including social media, the platform insists that its reportage based on facts only.

The ad goes straight for the jugular of those who accuse it of being a fake news medium calling them a distraction. “While the distraction may grab your attention, it doesn’t take away the fact that this is an apple,” it says.

“CNN has never been more relevant than we are now,” says Allison Gollust, CNN Worldwide’s executive vice president and chief marketing officer, in an interview. “There’s a conversation happening around journalism and media and the First Amendment,” she says. “It’s happening right now. We felt compelled to participate in that conversation with a brand campaign that reminds people who we are and what we do and why we do it.”

This approach at crisis mitigation appears to be gaining some traction despite troll attacks against it by other media outlets like this and this. A survey conducted last September shows that CNN is not only improving on all viewership indices but the month marked CNN Digital’s top month ever in unique mobile visitors and second-highest month in unique multiplatform visitors.  Additionally, CNN outperformed all competitors across all platforms, registering more multiplatform visitors, millennial visitors, mobile visitors, multiplatform video starts and a greater social reach than any other news outlet for the month.

On top of this upsurge, a recent survey shows that Americans are again finding their trust in the media at a time President Trump’s approval rating is hitting new lows. A Reuters/Ipsos opinion poll which surveyed 14,300 people in September, found that 48% of Americans have either a “great deal” or “some confidence” in the press, up from 39% last November. In November 2016, 51% of Americans said they had “hardly any” confidence in the press. That number has since dipped to 45%.

The rating scoreboard presently shows CNN – albeit the media establishment – giving President Trump the beating he deserves, and this may just be the beginning. CNN is winning not because it is special, or the fact that it is putting up a spirited fight but because it is difficult, if not impossible, for Trump to win any credibility war. He stands no chance.