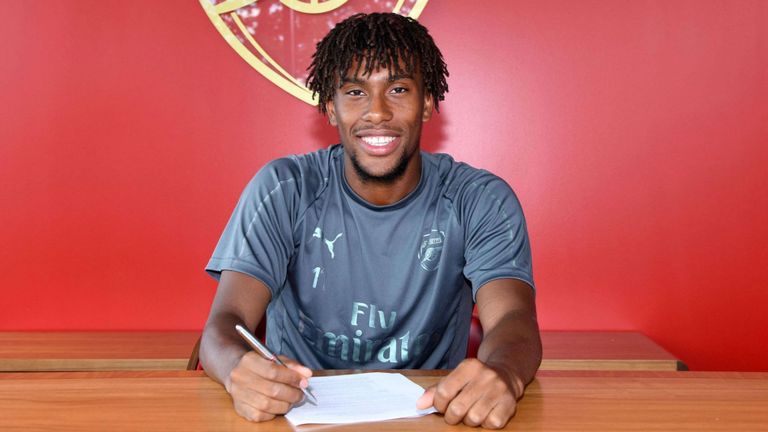 Premier League club, Arsenal has signed British-born Nigerian midfielder in a long-term contract. The club made the announcement on Friday.

New Arsenal coach, Unai Emery expressing his pleasure in Iwobi’s latest move said, “He is a great example of a player who can succeed from the Academy through hard work and I look forward to working with him and our other talented young players in the squad”.

Iwobi who has been with Arsenal since age 9 said, “It’s always been my childhood dream to represent Arsenal, from young,”. He also tweeted:

Really Pleased To Extend My Contract & Commit My Future To This Special Club. From Under 6 To BIG17 So Many People Have Helped Me. Thank You. Grateful To Our New Manager For The Faith Shown In Me & Our Fans For The Love, Support & Patience. Excited For 18/19 🙏🏽❤️ #Gunners pic.twitter.com/CUaEbpEv2B

Eleka, who is also the state’s deputy governor, cited intimidation and use of force. He also stated in his petition that the results announced by the electoral body, INEC contained discrepancies.

Although Fayemi has been presented a Certificate of Return as governor of Ekiti, Eleka has requested that the Election Petition Tribunal in the state declares him rightful winner of the election.

Kemi Adeosun’s deafening silence on the NYSC forgery allegations has become a cause for concern and Nigerians are surely not keeping quiet about it as today marks one month since the allegations became public:

.@HMKemiAdeosun your silence is not golden, it is shockingly unacceptable. You are a 🇬🇧🇳🇬 Citizen, in the UK you wont keep quiet on allegation as serious as forgery. It is over a month @PremiumTimesng published the story that you allegedly forged NYSC documents. SPEAK OUT!

One month since the Kemi Adeosun certificate forgery allegations. A govt supposedly led by a snow white,integrity dripping president & a virtous, bible quoting VP has said & done nothing & still continue to claim virtue. It is your intelligence they are insulting, not mine.

To sanction a certificate forger who is also a public office holder is important.

That’s why we must demand Kemi Adeosun case must be investigated to a conclusive end and if found guilty, she should pay the price.

Since Kemi Adeosun won’t speak up about her allegedly forged NYSC exemption certificate; and her principal is in his usual “I’m not aware” mode, it’s up to us Nigerians to demand that she should resign. Let’s not forget this issue, people.

Kemi Adeosun will only be prosecuted if she decamps to PDP. For as long as she’s in that party, she’s safe. APC is scum.