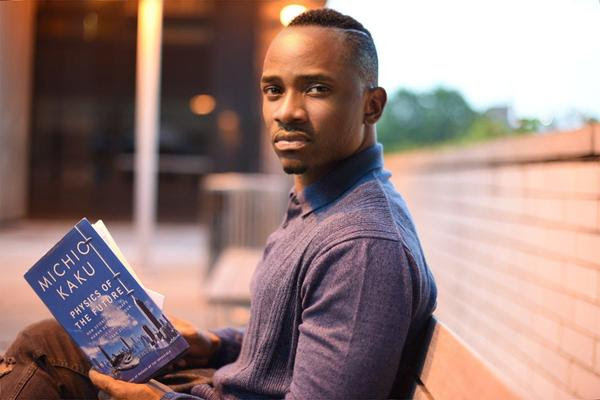 35-year-old technology entrepreneur, Chike Ukaegbu has announced his interest to run for the presidential seat in Nigeria.  Chike aspires to become the youngest civilian president of the youthful African nation.

Recently named one of UN’s 100 most influential people of African descent under 40, Chike was born on June 12th, 1983 in Owerri, Imo State to now retired civil servants.  Although he now resides in New York, Chike schooled in Nigeria from kindergarten through his second year at University of Lagos before heading to the United States where he studied biomedical engineering at City College of New York, Executive Leadership and Management at Cornell University, took MBA courses at University of Pennsylvania, and studied Venture Capital and Investments at Stanford University.

Chike taught Mathematics for seven years at City College of New York and entrepreneurship for two, while also serving as an Entrepreneur-in-Residence. As a second-year student in college, Chike was named a Fellow to the prestigious Colin Powell Fellowship in Leadership and Public Policy, which sparked an interest that led to research in youth disconnection and engaging disenfranchised communities. As a Fellow, he developed the HEROES Model for effective youth engagement. HEROES is an acronym for Heritage, Education, Relationships, Opportunities, Entrepreneurship and Service; six pivotal areas crucial for effectively empowering children and youth. Disconnection is a term used to define youths who are out of school and out of work between the ages of 15 and 25. Nigeria has about 15 million disconnected youths.

According to Chike, “for every powerful nation since industrialisation, the pillars of sustenance, competitiveness and wealth have been technology, education and entrepreneurship. Education, because it prepares the people to identify, understand, tackle and address their problems. Technology, because it drives innovation and revolutionary advancements that solve these problems. Entrepreneurship, because it creates communal wealth from identified solutions to problems. These three pillars are interdependent and serve as the foundation on which all other elements of greatness are built upon. In all three, Nigeria lags behind, as it stands at an unfamiliar crossroad of two dissimilar paths. If the country is to be salvaged, then we all need to arise and elect Nigerians who have the vision, strategy and compassion needed to serve and lead the people.”

Before turning 30, Chike’s passion to change and empower youth lives led him to become a certified foster parent as well as cofound Re: LIFE Inc, the first Harlem based non-profit organization focused on empowering at-risk and disconnected youth through education, entrepreneurship and technology. In 2014, he established the Entrepreneurship and Education Leadership Fund, which provided academic grants, seed capital and training to Nigerian youths. In 2015, Chike also launched Startup52. Startup52 is NYC’s first and award-winning diversity focused startup accelerator with a mission to increase diversity in tech and entrepreneurship by creating better access to resources, support and capital to founders from untapped communities. In its first three years, Startup52’s portfolio boasts more than thirty startups as it plans to launch Startup52Nigeria. Startup52 has been recognized by NYC Mayor Bill de Blasio and also named one of America’s Best Entrepreneurial Businesses by Entrepreneur Magazine.

Chike is of the opinion that “greatness is born of vision; of seeing the invisible and making it a reality. Nigeria needs a visionary leader now more than ever. This is our time and I am the right choice to lead our nation.”

He added, “it is Africa’s responsibility to defend and protect her children regardless of where they are in the world. As the largest Black Nation in the world, that mantle of leadership and advocacy for Nigerian and all Black lives globally falls on Nigeria. This election is also about the lack of leadership in advocating for people of African descent who are being discriminated against globally. The persecution and injustices meted out against Black people globally stem from the lack of representation and effective advocacy by governments that value Black lives.

Additionally, it is pertinent to understand that Nigeria’s advancement and that of Africa is hinged upon mutually beneficial collaborative efforts between citizens at home and those in the diaspora. Bringing people home to exciting and improved quality of life will amplify the knowledge base, enhance innovation and vision for action, increase tax base and expedite development and advancement here at home.”

A strong and compassionate leader, Chike has been a champion for marginalized, underserved and untapped populations, staying at the forefront of disrupting tech and entrepreneurial spaces through inclusive diversity in technology, education and entrepreneurship.

As a lover of the Arts, Cultures and Humanities, Chike minored in musical theater and performed in plays and musicals across New York City. He is also using media and the arts to tell the brilliant stories of founders and talents from untapped communities as a way to create better exposure for them.

Some of his accomplishments:
· Chike has been recognized by the UN as One of 100 Most Influential People of African Descent in the diaspora for his work with Re:LIFE and Startup52.
· He was invited to the White House to do a briefing on initiatives and strategies to empower underserved and underrepresented communities via technology, education and entrepreneurship.
· He was invited by the NY State governor to speak on increasing access to tech and entrepreneurship in underserved communities at the Minority and Women Business Enterprise Summit.
· He was recognized by NYC’s Mayor for increasing diversity and inclusion in the NYC tech ecosystem.
· He was awarded the highly coveted US Permanent Residency under the National Interest Waiver category for his work with Re:LIFE and Startup52.
· Chike was named an honoree for the prestigious forty under 40 award by The Network Journal.
. Chike was recognized as One of Ten Nigerian-Americans Making Waves in Tech by UrbanGeekz
· He was an honoree of Black Enterprise’s 100 Modern Men of Distinction award, which referred to him as ‘The Tech Accelerator’.
· Chike was named an NYC Rising Star by Pave
· Named a Patron of Progress by CuriosityLab
· Called one of 20 African Americans Impacting The World Through Social Impact and Social Innovation by Causeartist
· Selected by US Department of State to represent the US in China and Zambia as an entrepreneurship evangelist

Chike has consulted with more than 15 foreign delegations on how to build diverse, inclusive and engaged tech and entrepreneurial communities in their respective cities or countries.