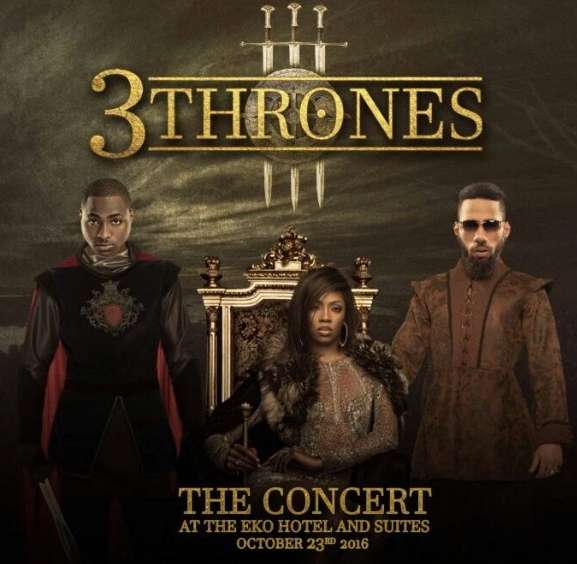 Over the past few months, there have been an unending conversation across social media platforms. Hundreds of people can be seen expressing their zeal for the highly anticipated concert ‘3 Thrones’; scheduled to hold on Sunday, 23rd of October, 2016 at EKO Convention Centre, Victoria Island, Lagos.

The monarchical-themed concert is in its maiden edition and is popularly described by the organizers as “the first of its kind”. Three of the most quintessential acts in Africa at large; Phyno, Davido and Tiwa Savage have been meticulously selected by the organizers to headline the concert. The trio are referred to as the “Kings and Queen”. Veteran disc jockey Jimmy Jatt alongside DJ Neptune were revealed to be the concert’s “guardians” while renowned dancehall sensation Timaya has also been announced as the “oracle”.

The Queen of the concert; Tiwa Savage took to her Instagram to express her excitement shortly after her announcement as one of the headliners, she wrote; “This year God has blessed me so much. 3 Thrones; I’m about to really deliver a mind blowing performance, as a true Lagosian”.

Popular wordsmith Phyno didn’t clam up on his excitement for the concert as well – speaking on his participation, the rapper-songwriter remarked; “It’s an honour to be part of a history in the making. It’s not often concerts like this are being held in Nigeria. My fans should watch out for an astounding performance that night – I’m going all in!”

‘3 Thrones’ is reportedly projected to be a paradigm shift in the Nigerian entertainment scene as it is not only being held to sate the desire of thousands of Nigerians for unbridled entertainment but also to put Nigeria’s entertainment industry on a pedestal worldwide.